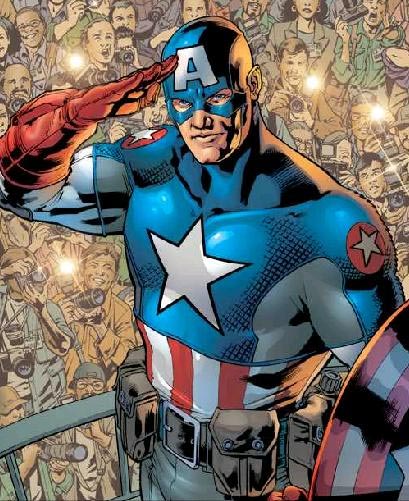 Captain America hasn’t always been a fan favorite but with the Avengers movie round the corner they need to get into gear and make movies to introduce some of the other members of the team such as Thor and Captain America in movie form.

The movie will probably be similar to the way Iron man was made, an introduction into the man behind the mask and the evolution of the mortal man into a super hero. The captain has had a shed load of comics made since 1941 along with more then one dude behind the mask.

The new movie will be based on the Steve Rogers origin and be set in WWII. This kind of gives away the ending for all the long standing comic book fans out there as he will be 60 years on in the Avengers movie… can anyone say cryogenic storage with Red Skull.

The cast for the new movie is still well hidden or undecided but the director signed so far is Joe Johnston. He hasn’t directed a lot but if quality over quantity has anything to do with it he will surly do a great job. He has put a lot of work into the Star Wars franchise over the years, and directed the Rocketeer which was also set in a similar time as The First Avenger movie.

The writers chosen for this movie are Christopher Markus and Stephen McFeely who both worked on The Chronicles of Narnia films. 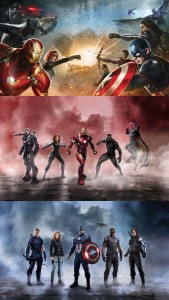 Captain America 3 to be based on Civil War 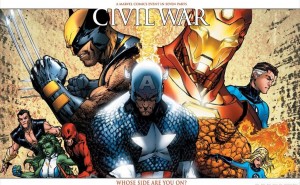 Making Civil War into a movie could put a lot of recent rumors to good use. Will putting Iron Man against Captain America make a movie cooler than Batman vs Superman? 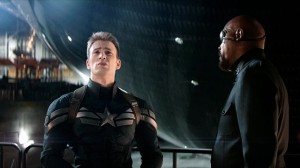 This is easily the best Marvel Studios movie ever made. Captain America 2 The Winter Soldier shows us Steve Rogers has a lot of story still to be told. Adding some realisum to the Marvel universe showing us now all super heroes are bullet proof. 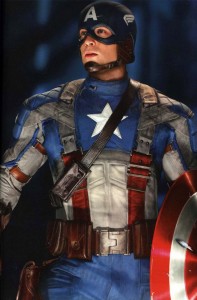 The Captain America 3 Release date has been confirmed for 2016 and will be going head to head against Batman vs Superman for an opening weekend. 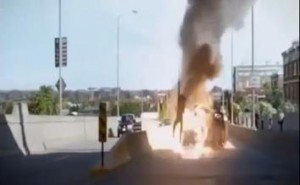 Scarlett Johansson’s stunt double in Captain America 2 has released a 2014 stunt reel which features a few frames from the movie. 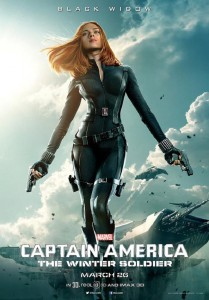 Captain America is due out this April and to help tease fans we have the latest poster which shows off the new look Black Widow.

The Captain America 2: The Winter Soldier UK Trailer Caphas been released and looks amazing, it’s a whole new look to Captain America and has some aweomse bits with Black Widow in too. 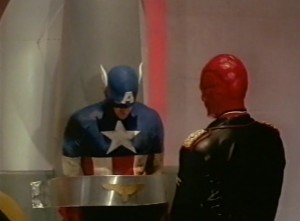 Here’s a review of the 1990 Captain America movie with comparisons to the recent one with Chris Evans. The movies are worlds apart in some parts but have a few bits in common. 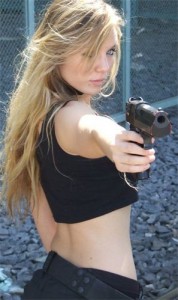 When you watch a finsihed movie its amazing to watch the likes of Black Widow kicking ass but you can’t give all the credit to to the actors. Here’s a video of Scarlett Johansson’s stunt double Amy Johnston in action.

Peggy Carter back for Captain America 2 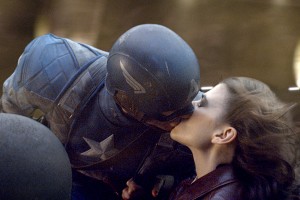 The Captain America sequel has just started filming and by popular fan demand Haley Atwel will be back to play Peggy Carter once again.

It looks like Captain America has moved on from Peggy Carter as he has a new girl friend in Winder Soldier. Emily VanCamp has just been signed for the female lead on the movie which starts shooting shortly.

Wasp may be joining Captain America 2 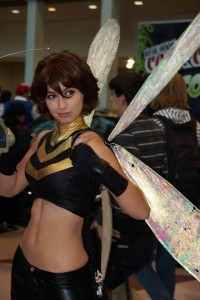 With Ant-Man and Avengers 2 in early production it may come as a surprise to some we might see Wasp first in Winter Soldier. 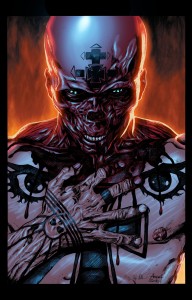 Marvel have announced the official release date for Captain America 2 for an early 2014 debut. Filming will start shortly but will probably be more closed set than the first movie. 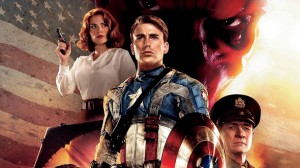 The latest news on Captain America two is that it will begin filming at the end of 2012 for a late 2013 release date along with Thor 2. 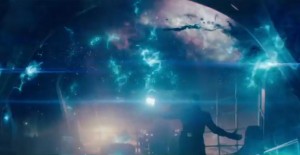 Those who have already seen the movie has said it’s the best Marvel movie so far. Going off these spoilers it’s not hard to see why. 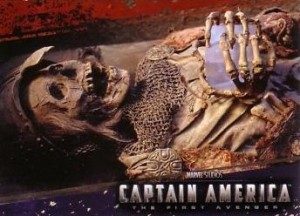 We have already seen Tony Starks dad appear in Captain America and here is the Thor cross over. It turns out the Cosmic Cube may have belonged to Odin

It could have been the hardest movie to sell but the production company have over compensated and made a freaking kick-ass movie, well judging off the second trailer. 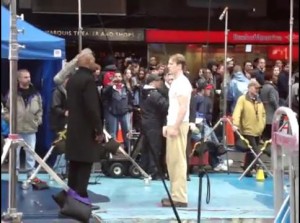 Steve Rogers lands in Modern Day New York city. It looks like he won’t be stuck in ice for 60 years.

With yesterdays amazing teasers from Paramount we now have the full HD Captain America trailer with a few clips of Manchester in there. 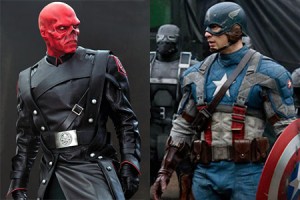 Thanks to Paramount we have a few sneak peaks at the Captain America trailer. For most people they wont be worth a watch but for those of us super comic book geeks they are an awesome teaser. 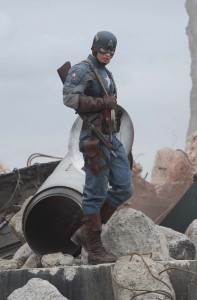 I may very well be looking more forward to Captain America being released than any other comic book movie in production even including Batman 3. Here is another look at the full movie costume. 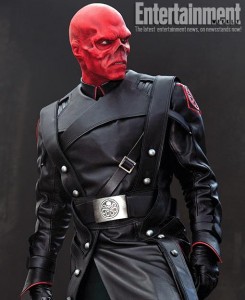 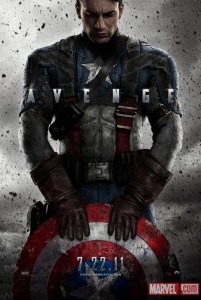 They don’t call it the Super Bowl for nothing. This years giant sporting event has also brought us the first look at the Captain America Trailer. 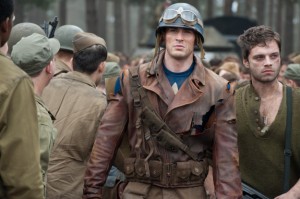 This years Captain America movie will be totally epic. It’s a modern day comic book movie set in the 1940s. Here’s the first picture of James ‘Bucky’ Barnes with his darker side. 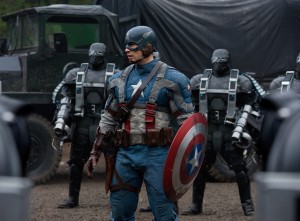 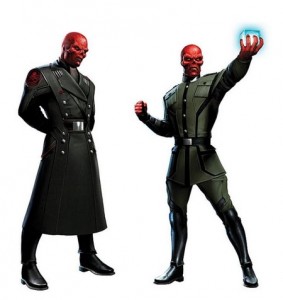 Maybe the first look at the Red Skull in the Captain America movie with some fairly legit concept art. 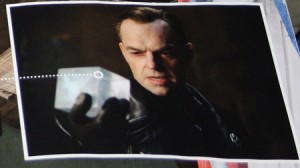 The first pictures of the Red Skull in this years Captain America movie also feature the Cosmic Cube, could this be the dooms day weapon? 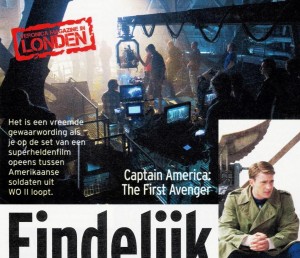 Thanks to Veronica Magazine we have a few shots of Captain America from behind the scenes.