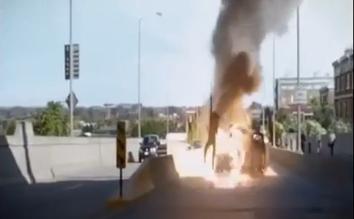 With Captain America 2 out this year one thing that really makes it stand out from the other Marvel movies is the epic stunts we have seen so far. The trailer was full of fights and SHIELD stuff getting blown up. Best of all more Black Widow who over the last few years has only been the real female superhero in the movies.

Most people will know of Scarlett Johansson being the face of Black Widow but behind each stunt or fight scenes there is another epicly trained stunt double bringing the super hero appearance to life.

In the latest stunt reel from Amy Johnston has a few frames from the Captain America 2 movie along with over a minute and a half of other ass kicking scenes.

It’s great to see reels like this as they tend o be the best bits of dozens of movies all rolled up into a minute and a half.