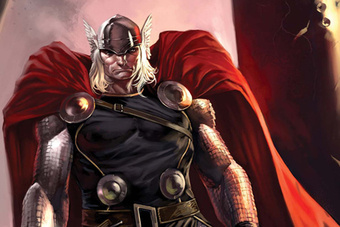 Marvel have been in movie making overdrive latley with Spiderman 4 going in to production early 2010 we finally have a few updated on the Thor movie.

The latest cast member to sign up is Idris Elba (28 Weeks later) who is going to be playing Heimdall Verily.

The Warriors Three have also been officially announced as Stuart Townsend(The League of Extraordinary Gentlemen, Robot Chicken) as Fandral, Tadanobu Asano(Tokyo Zombie) as Hogun and Ray Stevenson(The Punisher) as Volstagg

The star of the film Thor is still being played by Chris Hemsworth(Star Trek). Loki will be played by Tom Hiddleston(Casualty) who has also signed up for the Avengers movie and newly signed to the cast is Anthony Hopkins(Silence of the lambs) as Odin, Oh and I almost left off Natalie Portman(Star Wars) as Jane foster.

So far so good, its an amazing cast, I just wish Ray Stevenson was going to play the Punisher again.