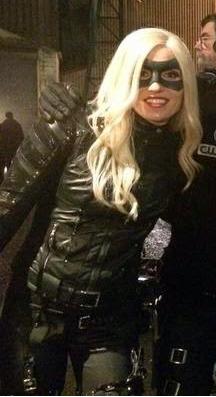 A behind the scenes picture from the set of Arrow has surfaced Katie Cassidy’s stunt double dressed in the Black Canary costume.

It looks like Laurel Lance will be suiting up to take over from her sister a lot sooner than we thought. It was a big move to for the writers of Arrow to take Sara Lance out of the picture but it was the natural move as Laurel was always destined to play the superheroine.

The new costume is a bit more home made than the Sara Lance version but it still has a lot of the same features as the whole black look, mask and the blonde wig.

Since the picture has only just surfaced it could mean we will see the new look Canary either very soon or if they have only just shot the scene it could be towards the end of the sencond half of the season.

Now we just have to wait and see if Ras Al Ghul and his team of assasins will ressurect Sara Lance some time in the future. It was hinted on with Nyssa asked Oliver where Sara was burried but only time will tell if we will get two Black Canaries on screen at the same time.