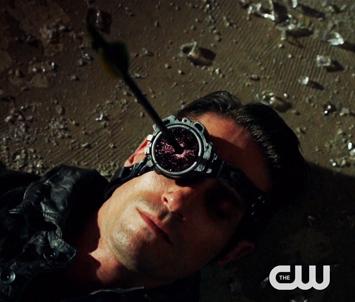 The new show from CW based on DC comics Green Arrow has gone from strength to strength with a growing fan base, its passed the tough pilot episode void where its down to the studio and now down to viewer ratings to get a second series.

In the wake of an awesome third episode it’s surprised me a little by doing something most movie franchises avoid doing, they killed off a highly respected DC super villain after being in one episode.

It’s something numerous DC comics heroes should have done at one point or another. If Batman killed the Joker or at least put him in a high security prison instead of a low security psychiatric hospital maybe thousands of Gotham city citizens and a Robin might have survived. Even in Christopher Nolans darker side to Batman wouldn’t kill. Arrow does it each episode.

Is it a good thing that Arrow kills so many of his enemies?, I’m not sure but it really was surprising to see Deadshot get an arrow through the eye in the third episode of Arrow and I can’t wait to see what the writers have got planned for the rest of the series.

Overall the Arrow series just gets better with each episode. Unlike Smallville you don’t need to wait years for the character to develop because he’s already the finished product and through flash backs over the last five years you get to find out a little more about how he got where he is with each episode.

It’s a fresh new series based on a classic comic book hero. A well reinvented DC icon which I hope takes the Arrow show up to a series 10 down the line.