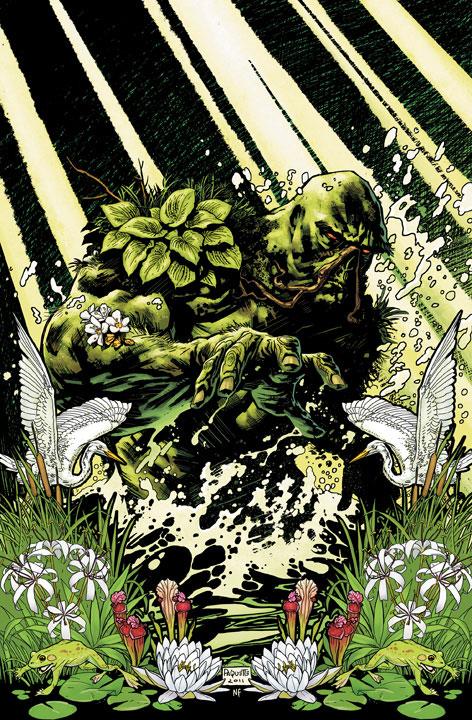 The latest offering from the DCnU is Swamp Thing written by Scott Snyder (American Vampire) and Yanick Paquette (Transmetropolitan,Avengers). Swamp Thing was always a great comic or movie for most fans. He was a true hero of the planet and not just close friends and relatives.

Snyder’s first issue is so far the closest thing to an Origin issue out of the DCnU. The other titles all seem to start a year or so into becoming a super hero. Through the story you see world events and how Dr Holland got to where he is now.

Dr Holland walks through his Swamp Thing origin with Superman (Present day time line) and says he died in a lab accident and came round a few weeks later. An interesting point here is Superman says he can relate to Swamp Thing, maybe over the next few years in Action Comics we will see another Death of Superman event.

Well. Because I know how hard it can be, coming back…

How strange your old life can feel afterward.

Back onto Swamp Thing’s Origin, in comparison to the old it looks like the accident with Dr Holland and the lab explosion may not have turned him into Swamp Thing but left the two as separate entities with different powers. It’s a cool twist to the story without changing too much of the characters identity.

The first story line seems to involve zombie animals which is how Animal Man #1 left off which could mean the two stories could overlap at some point in the near future.