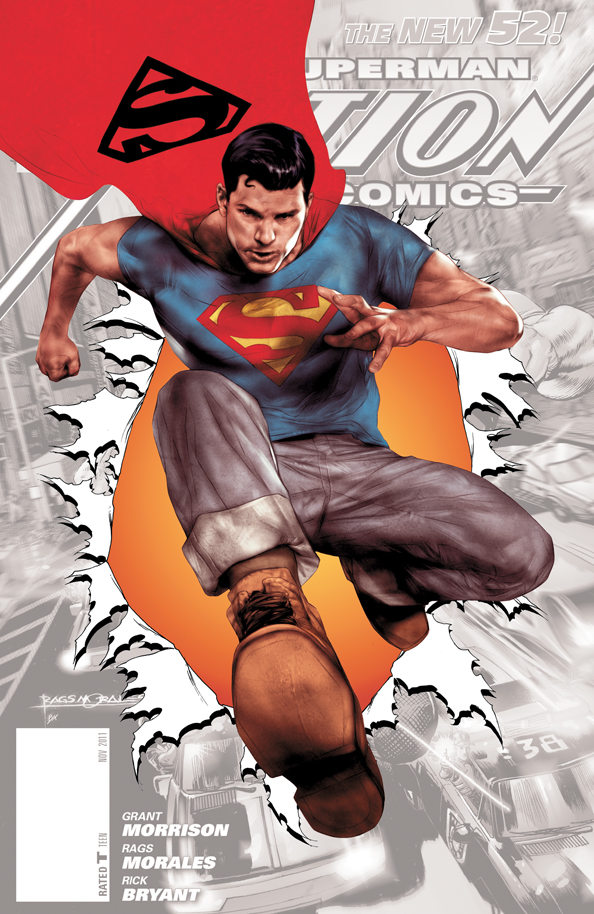 One year on from one of the biggest changes in comic history as DC decided to re numbe decades of comics back to issue #1 and redesigning each hero and villains origins.

With the reboot Action comics probably took the biggest hit after establishing its selft through over 900 issues since 1938.

Issue #0 is written by Grant Morrison who is currently doing the rest of the series and and if you haven’t followed the series so far its a good jump on issue. Not much happens but it tells us where Clark kent is up to with settling in Metropolis.

Clarks just ordered 200 t-shirts with his legendary S on and been shot off a roof with a rocket launcher, Classic Superman at his best. It does read like a filler issue as nothing really happens but you do get a few nice insights into how Clark becomes Superman.

But the issue isn’t all good, cover wise you would normally expect something a bit more WOW than the photoshopped guy with a Superman T-Shirt jumping through a torn paper effect back drop. It’s also in the more common $3.99 price tag which is an increased price compared to most other comics. For the price of two or three issues you might be able to get a good Graphic Novel for the price.

Talking to the local comic store they don’t think the DC reboot has done much for the publisher as after the hype of collecting issue #1s just a year later they are back to the sales they had before.