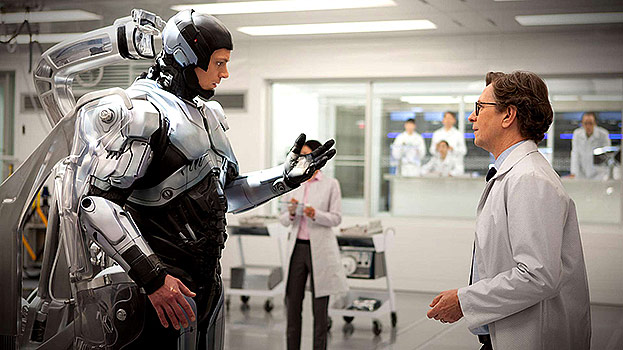 "We well thought out remake."

This review is coming from a major fan of the classic Robocop movie, I’ve seen all three of the main movies and even those TV movies the Prime Directives which were labled as Robocop 4-7 and for anyone who has seen any of the movies past Robocop 2 this film is going to be welcome addition to the Robocop movie collection.

The main plot revolves around a law which stops OCP making 100% robotic cops, so far they have been made legal in every other country and used on the front line in war torn countries. OCP want to sway the public opiniion on the law by getting a robot on the street which has a human conscience, enter Robocop.

Starting with the cast of the new movie apart from Robocop himself it’s a pretty all round well known cast. Gary Oldman (Commisioner Gordon) plays Dr. Dennett Norton who is the inventor of Robocop and the most ethical out of OCP. Dennet comes up with a few new concept on how to control Robocop and balance the human element in the machine. Then we have Samuel L. Jackson who plays Pat Novak, his role replaces the classic news reports which keep us up to date with matters outside the Detroit police department. OCP is run by Raymond Sellers played by Michael Keaton (Classic movie Batman) and his main objective is to get the law changed so he can police America with his law enforcement robots.

With the amount of remakes coming out and it’s easy to think this film will be another Michael Bay crapfest but it’s nice to see the people behind the camera have made it to compliment the original. It doesn’t go massivly far away from the original concept but gives the old fans something new to take away as if it was exactly the same you might aswel just watch the old one on Netflix.

The main thing this one was missing was probably the classic bad guys from the first movie. Back then the line between good guys and bad guys was more defined. In this movie everyone is pretty close to the line and crosses it from one point to the next. Compared to the original one where Murphys human element was the driving factor in this one they have more of an on off switch between human and robot mode which is a cool feature which makes it more apparent he is property of OCP.

Another thing this one lacks is the violence of the original. The first movie was made in the golden age of over 18 ratings. This one is made in a time where movie makers want to sell more ticets to a wider audience so it’s suitable for over 12s. It’s on the more violent side of that rating but it is still a 12a.