It might not come to a surprise to a lot of Power Rangers fans but the movie which cast its rangers months ago has just added a Rita Repulsa to the line-up.

To play the age old alien witch Lionsgate have cast Elizabeth Banks who is more notably known for her work in the Hunger Games movies, Pitch Perfect and the Sam Raimi Spider-man movies.

The movie is set to be released in a little over a years time so filming will likely start very soon is they haven’t already filmed some of the scenes.

In the original series aired in 1993 and revolved around Rita trying to take over the world from her moon base, for some reason always trying to start with Angel Grove. She had at her disposal a gang of equally evil monsters and an almost never ending supply of clay based size shifting beasts. How much of those will show up in the new movie is in the air at the moment but I’d love to see Lord Z and Goldar join the cast next.

Lionsgate have had great success making movies in the last few years but this could be the first one which will have an epic toy line to back it up. Just about everything with this movie so far has been kept very secret, even with the Transformers movies we had seen concept art and dozens of TV spots by now.

With Elizabeth Banks joining the cast it brings a bit more experience to the cast and from how she managed to dress up and act in the Hunger Games I think she is a clear winner for the Rita Repulsa role. 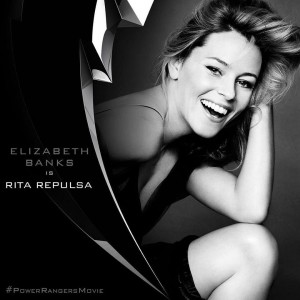