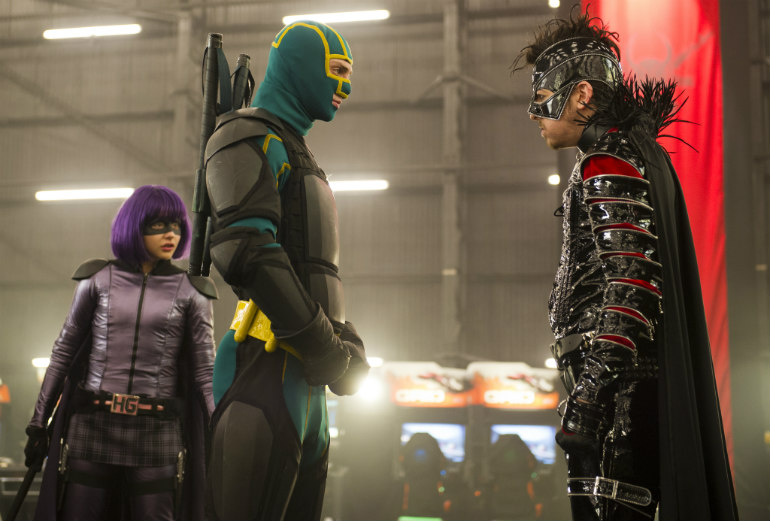 "Re watch factor times a thousand."

This review of Kick Ass 2 comes from a big fan of both Mark Millar and the Kick Ass comics so it may be a little bias towards its epicness.

Comparing it to the comics it’s a very loyal to the source material. I think this is due to two factors, one that that the comic is going to have a third series so the movie needs to keep to the same story for the sequel to make sense and two that Mark Millar is a genius comic writer and everything he writes makes a good movie so they don’t have to change much.

For anything they have taken out of the comics they have added a whole lot more in exchange. You get a lot more of Hit-Girl (Chloe Grace Moretz) in the movie to help fill out the hour and a half along with more from the Mother F#cker who was Red Mist (Christopher Mintz-Plasse) in the first movie.

If you’re not too bothered about the comics and just want to appreciate it for the movie quality its going to keep everyone happy. It’s a comic book movie but since it’s set in the real world you don’t need crazy CGI scenes which tend to ruin what could be a good movie #cough’ Green Laim’tern#. I’d love to invest in the Kick Ass movies as they will be watchable in a hundred years thanks to the character development and lack of CGI so it’s going to age well. I wouldn’t be surprised if schools swapped teaching Shakespeare for Kick-Ass and his work on the Avengers.

Easter egg wise there are a lot of posters of Mark Millars comics including Secret Service, Superior, American Jesus, Supercrooks, Nemesis, War Heroes & Wanted. All very well hidden apart from the Superior one.

It’s probably going to be one of the most watched comic book movies of the year partly due to the whole Jim Carrey pulling out of promotion because it was too cool or something, but also because it has a great re-watch factor. It’s fast paced and fits a lot into the hour and half making it easy to miss minor bits. I wanted to go back in a watch it as soon as it finished.

The post credits scene which was first reported here was well worth staying for. They make you work for it though as the credits pretty much list anyone who walked past the set to the people who provided the shark tank.

The future of Kick Ass movies is very bright, the third will probably be announced soon and fans of Hit-Girl will be pleased to know we will probably get a stand a lone movie for her in the next few years. I know that because it’s just obvious. She’s the strongest female character in comics and one of the best role models any girl could have. She could easily carry her own movie and she is probably Mark Millars greatest invention. I can’t think of an independent DC comics or Marvel female character who didn’t constantly need back up from a male role. She’s like a modern day Red Sonja with machine guns, flick knife and a motor bike.

There is a lot of hype around a Superman vs Batman movie at the moment and they are both very lucky Hit-Girl doesn’t cross over into the DC universe and kick both of them in the balls.

Overall nobody could be disappointed with this movie and it’s going to be loved in decades and has something for everyone. The must see comic book movie of 2013. If you want more and can’t wait for the sequel pick up the comics as Kick Ass 3 has just hit the comic shops.