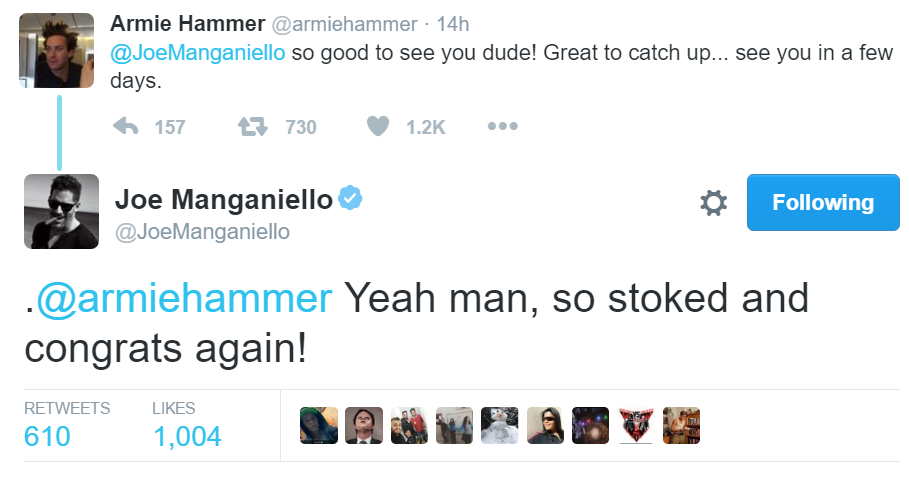 It’s one of the biggest mysteries in the comic book movie world at the moment, just who will take on the Green Lantern mantel?

Ryan Reynolds played Hal Jordan in the last Green Lantern movie which could have been the first in the new DC movie universe if it wasn’t so terrible. Reynolds played a great Hal Jordan but the movie hit the same hurdles the new Fantastic Four movie did, it ran out of budget and the story had to suffer.

This is where Armie Hammer comes in, he was actually cast to play Batman in the original Justice League movie, the script and casting looked great but at the time the dollar dropped in value and as they were filming in Australia it meant the budget dropped considerably and the movie was scrapped. Fans of DC movies have been wondering what an Armie Hammer Batman might have looked like and it looks like Warner Bros maybe considering an alternative role for him. This news comes from several trolls from the cast of the Justice League via twitter.

It is strange how WB haven’t cast a new Green Lantern yet, we have a new Cyborg and Flash and their films aren’t slated for release for years either, but Green Lantern is due out about the same time and we still don’t have any information about the casting.

At the moment we don’t know what’s going on, one rumour is that Armie Hammer has been cast as the Green Lantern and he will be featured in the upcoming Batman movie before starring in his first solo movie. This might sound like a strange move but it could work really well in terms of timing as we would see Hal Jordan return to screens before the Justice League movie.

From the news so far it’s a big jump to say Armie will be the new Green Lantern but WB does need to cast someone soon.