The Justice League movie overall was a hit and took DC movies in a slightly new and more refined direction. The production of it looked to go through a lot of changes though, scenes matched up from the early trailer to the finished movie looked massively different and the main cause seemed to be Zack Snyders original vision and the final product which was later edited by Joss Whedon. 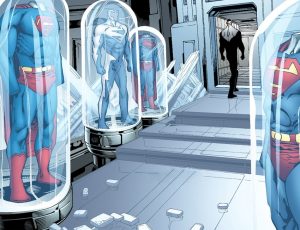 One thing a lot of fans wanted to see was Superman’s iconic black suit. To a lot of people it might not have much significance but to fans of DC comics will know it as the suit that helped Superman recover after being almost killed by Doomsday. If you haven’t read it, pick up The Death of Superman and the Return of Superman. To me the Death and Return of Superman series was one of the best comics produced by DC, it’s up there with Crisis on Infinite Earths. Taking out a scene with the black suit has removed a great nod back to the comics and taken away a lot for fans of those books.

The scene doesn’t just show us the iconic black suit which helped power up Superman but also a Kryptonian Space Suit which we saw in the Man of Steel movie when Zod and his team were exploring outposts in space.

I really think the movie could have benefited a lot from keeping this scene, it would have at least confirmed how Superman got his new suit in the movie since his last one was torn up after being impaled by Doomsday.

Now a lot of Zack Snyder fans are demanding to see the original cut of the movie before Joss Whedon did the re-shoots and edits. Maybe it will resurface in the future like the Superman 2 Richard Donner cut which was in a lot of ways superior to the original release.