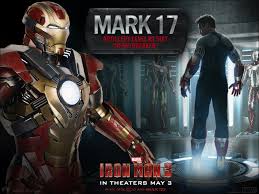 Before we all lose count of how many amazing suits Marvel concept artists have designed here is a list of suits used in the movies.

The suits have always been a major part of the Iron man movies with each movie introducing several new ones but with Iron Man 3 we have dozens of new ones to keep up with. It all began with an Iron Man movie poster with the Iron Legion but has grown in interest since.

Mark 1 The first prototype suit made in a cave in Afghanistan.

Mark 2 All silver and the first suit to fly with much more advanced weaponary.

Iron Monger This was a badly made clone of tony Starks armor, the original concept art was based on what a movie version of the Hulk buster armor might have looked like.

Mark 3 The first painted suit which fixed a freezing problem giving it the edge over the Iron Monger suit. This was also the first to be fitted with a remote JARVIS.

Mark 4 With upgraded weapons to Mark 3 this one can be warn without a jump suit and was overall a bit more rounder than previous suits.

Mark 5 – Suitcase armor This was the travel armor which Tony used in the second movie. It didn’t have the weapons of the normal suits and really should have been used more.

Mark 6 The first triangular chest plate armor which makes it stand out a lot more than othe others which all have a circular arc reactor.

Mark 7 The Avengers suit which brought back the circular chest piece because Joss Whedon likes the classic look.

Mark 17 – Heart Breaker This one has an enhanced chest piece designed to give out huge blasts of energy from its arc reactor.

Mark 33 – Silver Centurion This suit gives Tony a higher level of protection from things like head, cold, acid etc and also let him move faster than any other suit.

Mark 35 – Red Snapper The main characteristic of this one is it’s arms giving it a longer reach and stronger grip..

Mark 38 – Igor The Heavey Lifting suit, this was thought to be concept art for the movie version of the Hulk Buster armor in Avengers 2 but is more of a tank suit for Tony.

Mark 29 – Deep Space Armor This one will go far beyond any other and will likley connect the Avengers universe to others like Guardians of the Galaxy.

Mark 40 – Shotgun This one resembles the centurion from the Thor movie. It’s rumored to be a high speed armor.

Mark 42 The main suit in Iron Man 3, this one is an all rounder being powerful and fast. It also seems to be the one which Tony uses to control the Iron Legion which is all the previous suits at once.

Iron Patriot This one is War Machine v2. Its based on the Norman Osborn Dark Avengers character which was an epic suit but couldn’t be put in the movies anby other way as Norman Osborn is owned by Sony when it comes to the movies.

Rescue Armor – Iron Maiden This is the long awaited Pepper Potts armor which finally gets used in the movies. Designed to keep Pepper safe it ends up saving Tony atleast once in the movie. 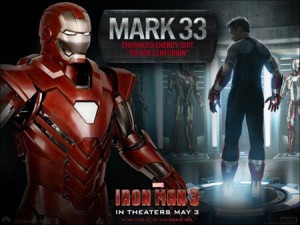 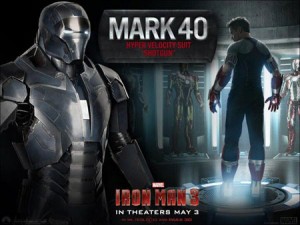