Last year I tried to avoid zombie comics like the plague – but after last years Thought Bubble festival and the “do zombies read comics” talk I decided to pick up a copy of Walking Dead Volume one from the local comic book shop.

Walking Dead is a totally kick ass comic series so far, I’m sorry I missed Walking dead for so long as it’s one of those comic series which is really easy to follow and looks to have a really well thought out plot. Most of the story is about how people deal with extreme situations.

As far as comics go it’s the ultimate survival guide. I think the best way to put it would be zombies are as much a part of this story as time travel was to Quantum Leap.

Written by Robert Kirkman who also wrote Invincible and Wolfman has done an amazing job on this one. When I first picked it up I thought I’d be happy with just the first volume but it really isn’t enough and I can see myself picking up the whole set.

As a comic a good story isn’t enough and the work that Tony Moore really brings the story to life, Terry who also worked on The Exterminators and Fear Agent has done a very impressive job of bringing the characters to life and he draws a damn good zombie too.

Make your own mind up thanks to the wonders of the internet, Walking dead issue one thanks to Image comics. 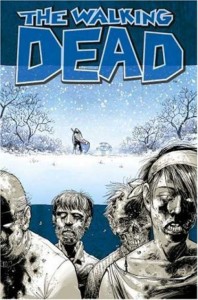 Can’t wait for Walking Dead series two next October, why not get ahead with the second volume by Robert Kirkman. The ultimate zombie survival guide.