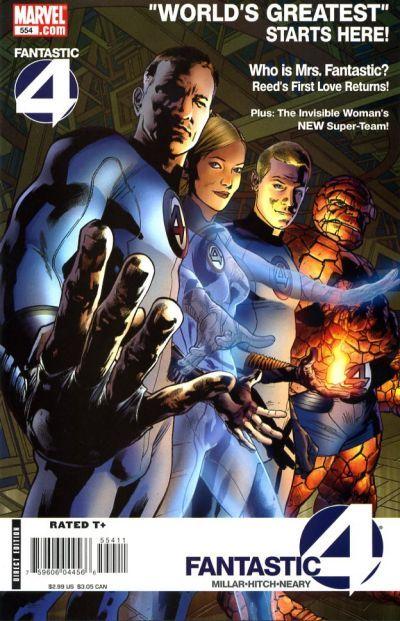 This was one of those gems you find in a box at a comic fair. I found this one at this years Thought Bubble and who would have thought a Fantastic Four book would have been so much fun, well one of those guilt comic pleasures.

One thing that attracted me to this was the big Mark Millar – Bryan Hitch heading across the top. Say what you want about Mark Millar but he definitely knows how to deliver an exciting story new story to old characters.

This one is Fantastic Four: Worlds Greatest. which collects FF #554-561. Even if you don’t like the FF or haven’t read any TPBs it’s a great Marvel run. Looking back at the feeble death of Johnny Storm from in FF #587 this run delivers a lot more death and destruction along with a great insight into the future of the team.

The first half to be honest wasn’t too amazing, it was a good well paced setup for the rest of the epic story. A team of scientists try to enlist Reed to help them build a “new Earth”. Basically the earth is dieing and some people gave up on trying to fix it. the solution was to build a new Earth through a worm hole. Once it’s finished they can move everyone through and live on the new planet without weapons and fammon.

As it moves on Johnny falls for a super criminal and Reed gets a mysterious nanny to look after the kids while he works on the new Earth project.

Moving through the story without giving too much away we get to see some giant teleporting ultimate weapon robots fight to the death. The Thing punch through Wolverines face. A smart descendant of the Hulk who is also son to Wolverine, whats not to love.

And last but not least the death of Sue Richards and Galacticus within the space of a few pages. In true Mark Miller style the run goes out on an epic high.

Overall I think this is a great run for anyone wanting to pick up a Fantastic Four book. It’s not overly outrageous and includes a host of characters without you needing to follow several other series to figure out whats going on.