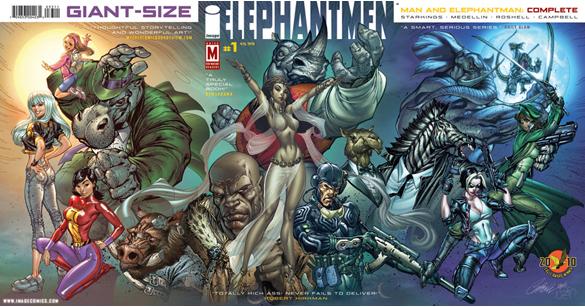 If you buy one comic this year make sure it’s Man and Elephantman Complete. Even with Action comics #1 out this year I’d take this over anything.

It’s a reprint of Richard Starkings Elephantmen #31 and #32 in one $5.99 no advert epic issue. Right from seeing the cover which is J Scott Campbells trifold the issue has paid for itself. Inside you have everything you could want from a Mature Sci-Fi comic. The cover could sell the comic on its own but combined with the award winning story telling and masterpiece art work you can’t miss it.

I’ve always supported Elephantmen as a series being a fan of Sci-Fi, and mutant loving hot comic chicks. Being in it’s early thirties if you have been wanting a jump on issue or to find out what Elephantmen is all about this is the easy jump on issue for new readers, for old readers you finally get the complete cover.

The story kicks off with the introduction on where the Elephantmen came from with some awesome imagery of the mad science which created and trained them into killers.

The story then jumps into Hipflask’s dream about becoming human, I think this was the controversial second “M” rated issue featuring Miki’s awesome natural comic boobs. Hipflask is as much a hit with the ladies as a human as he was in Mutant form as far as Miki and Sahara go.

The human dream ends with a double page spread of the evolutional process of turning from Human Hipflask to his classic genetic mutant form defining the meaning to the saying a picture tells a thousand words.

The next story starts with Miki dreaming of giving birth to the first human born Elephantman in a page reminiscent of the iconic page in the first issue. The story continues to show how people still regard the Elephantmen as animals comparing animal abuse to the raising of the Elephantmen by Mappo the evil genius who created them.

The issue then moves onto the third chapter of the story “The Dragonkings Daughter” which is just a fun Red Sonja homage story to finish the extended issue.

Overall it’s a great issue for new readers to catch up and for old readers to get a refresh with delays. The trifold cover really need to be made into a giant poster as it’s the legendary J Scott Campbell at his best. I’d have easily bought this as an over sized hardback issue just for that. I’d still love for Elephantmen to become a bi monthly comic because you don’t get many series like this. The story just keeps developing with each panel, no filler issues just pure comic gold.