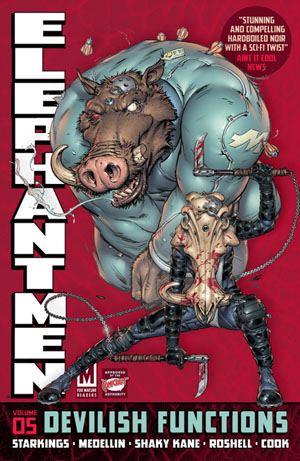 Elephantmen has been in print since 2006 and just keeps getting better and better. It’s so much more than just a science fiction comic as it totally reinvents the genre with its amazing artwork and at times adult themes.

Volume 5 – Devilish Functions collects some of the best issues so far and has just the right balance of mutants, chicks and mystery.

All the Elephantmen comics show how the war machine mutants are rehabilitated into society and face some crazy problems. This volume really shows just how great Richard Starkings story telling is, he fits so much into a fast paced comic and has this amazing long running story while still making each issue self contained.

The book kicks off with Man and Elephantman which was a very popular single issue release which had a mature rating attached due to the nudity and mutants suffering from substance abuse, little to say it was an awesome comic which goes far beyond the typical sci-fi genre.

Issue #32 is another similar issue but pays tribute to Conan the Barbarian, when Ebony takes a drug called Mirror he visits a fantasy world far beyond Hipflasks. In his dream he’s accompanied by a very Red Sonja looking girl and fights his demons hand to hand. With this issue it’s almost like the team are showing everyone just how flexible and skilled they are at the art. Rich’s team have no limits to when it comes to crafting comics.

“The Lovely Bones” is the title of #33 and this could very well be one of the more original stories I’ve read in a single issue comic for a long time. It concludes an on going side story from a few issues where Elephantmen Ivory has been poached leaving a number bodies. It’s a really great example of extreme vanity and how it can stop us from seeing what’s important. The fact that lesson is delivered by genetically engineered human/animal hybrids makes it even more potent.

The book ends with a four part arc called Killing Season which marks the return of Yvette a French girl we were introduced to back Before Elephantmen came in color back in the War Toys days.

Overall Elephantmen Devilish Functions is a must read, if you haven’t read any Elephantmen before you will miss a lot of the references to past issues but not too much as any important recaps are included. With Elephantmen Richard Starkings has helped redefine Science Fiction making it fresh, cool and sexy.

Other recommended reading: Metal Made Flesh.