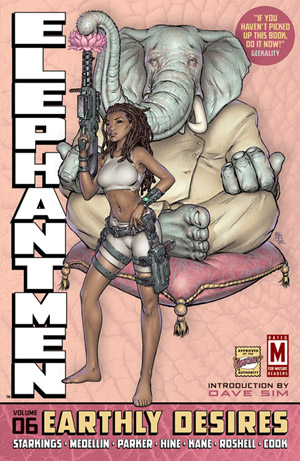 "Religion, inner demons and girl problems through the eyes of genetic mutants"

Elephantmen is easily the best sci-fi comic in print at the moment and will soon be celebrating a ten year anniversary. It’s an amazing story exploring religion, relationships and inner demons told using armed war machine mutants and a variety of comic chicks.

This volume kicks off with Elephantmen #40 Uncommon Allies. It’s an amazing start as it introduces a new reintroduces you to two very important secondary characters The Silencer and Panya. One a gun for hire and one a stand in for Sahara. They have every reason to despise each other but by the end of the issue they put it all on the line to save one another. Without spoiling too much for later on it’s an interesting relationship which you if you have read the early issues will know it doesn’t end well.

The second issue included is The Long & Ghastly Kitchen. It’s another great jump on issue which explains the history of the Elephantmen and how two scientists met an shared ideas on cross species genetics. It’s a great story which delves into our interest throughout history in human animal hybrids and how have been seen as both gods or monsters.

Moving onto the third part we see how much research Richard Starkings has done into building up the sci-fi epic which is Elephantmen and brings it into the real world. He quotes a U.S bill the Human Chimera Prohibition act of 2005.

This is another issue where your imagination takes you from science fiction to what could one day be science fact. There maybe a U.S bill preventing the creation of Elephantmen but it’s possible this series could inspire similar experiments somewhere else.

Enter Sleeping Partners part 1. At this point in the series we also have not one but two females pregnant with Obadiah Horns baby. I’m really looking forward to seeing how it pans out as they have been building up to an Elephantmen / Human baby for a while and it will also be a major turning point in the series.

Although the Elephantmen have names, personalities and jobs they technically aren’t classed as a species.

Definition of a species:

A group of living organisms consisting of similar individuals capable of exchanging genes or interbreeding.

So far in the story all the mutants are male and unable to breed on their own. So unless either Panya or Sahara have a baby which can also reproduce they will still be just genetic experiments to the world.

As the story moves on we get into some classic Sci-Fi action by blasting off to investigate something strange on the moon. The Black Dragons aka kick ass mutant Chinese tigers make a short lived come back and close this volume with some amazing artwork.

One thing I always loved about Elephantmen is that it’s written by one of the best story tellers in the industry. It’s not always about the start and ending of Elephantmen, it’s all about the journey in between. This is a great way of telling the story but sometimes I really wish some of the events from the first issues like they having a human/mutant hybrid or finding out what happened to Nikken could be closed off.

The world Elephantmen is set in really gets your imagination working overtime, they go into so much detail and work with a lot of side stories exploring lives of sub characters. At the moment I’m not sure how Elephantmen will end or what it’s leading to and I’m almost missing that tease you get with some comics.

Earthly Desires closes with issue #49 leaving Elephantmen to move onto the big five zero and I know Starkings and his team have got some big things planned which will hopefully answer all the questions fans have had for the last decade.

Pre order Elephantmen volume 6 – Earthly Desires on Book Depostiry or do a price check on Graphic-Novels.net