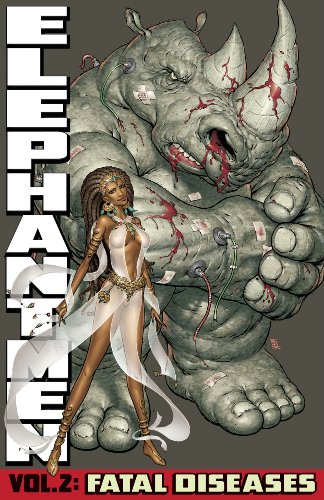 When I first flicked though the pages of Elephantmen Wounded Animals in my local comic store it was a no brainer must buy. The artwork is amazing from issue to issue which is a hard thing to maintain when the series is contributed to by so many artists. But once you get over the amazing art work you get pulled in even further with the hard hitting adventures of the hippopotamus detective.

Elephantmen volume 2 : Fatal Diseases continues with all the over lapping stories. The book has a darker feeling than the first book which takes it back to the War Toys and Unnatural Selection days.

Other than just get a bit tougher the characters all seem to have developed better relationships with humans which I’m looking forward to seeing develop further in coming issues.

Richard Starkings has come up with an amazing world to tell stories through. The genetic experiments who were made for nothing but war and raised without love have grown humanity from nowhere and worked to have lives with people.

It’s easily comparable with Planet of the Apes, the first time you watch the movie you can see they are apes who are for a majority angry and unsocial, unwilling to accept change or the truth. But once the film is over you realise the apes are just a catalyst to capture your imagination before you realise they live in the same world we do.

When you read the Elephantmen it’s the same felling, you get pulled into the story with the premise of sci-fi horror but you realise its just a beautiful world to tell kick-ass hard-hitting stories with.

Over all I wish I had picked up Elephantmen back when it was still called Hipflask as I could have easily framed every awesome issue.

Spoiler: If Miki had died from a space virus my opinions on this book could have been very different, don’t play with our feelings Mr Starkings!