Transformers Dark of the Moon Review 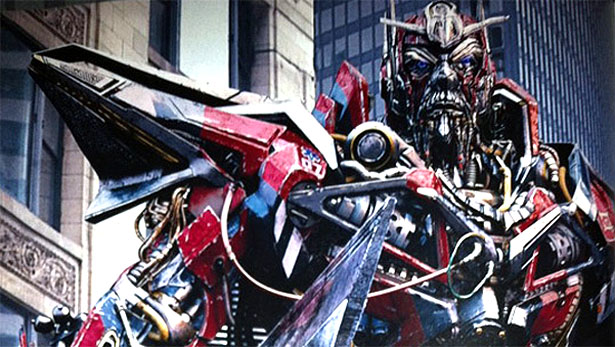 Maybe most comic fans guilty pleasure of the year. Transformers 3 is finally out in the cinema and concludes Michael Bays part in the movie franchise. There may be a few spoilers ahead so watch out.

Transformers Dark of the Moon makes the previous movies look like sound tests. Michael Bay at the time of filming the third movie had finally mastered the giant killer robot movie genre. Easily the best of the three movies. Even better then the fight on the motorway in the first movie and better than the extended Forest fight scene from the second movie.

One of the great things about this movie is all the trailers and TV spots have just been a warm up. Nothing was spoilt for the movie and it totally ticked all the boxes in awesomeness.

The film kicks off with some seamlessly sliced together pictures of the moon landing and discovery of the Ark on moon. Soon enough Prime and a few other Autobot’s fly up and bring Sentinel Prime back to Earth. Sentinel Prime was the leader of the Autobots back on Cybertron before Optimus took over. He’s a confusing character, in some ways he is a good Autobot. All he wants it so re animate Cybertron and bring life back to his once great planet – but at what cost…

Obviously Megan Fox has been cut from the movie. It turns out it as Steven Spielberg who wanted her off the set. I’m not going to start another rant about it all but if the third movie was imperfect it was only because of the lack of one of the franchises most popular characters.

Rosie Huntington-Whiteley did make a good replacement though. Going off the trailers I didn’t think she would be able to fill in for the Fox but she did a good job and helped make the movie one of the coolest movies of the year. Well worth the 3D even.

Shockwave was very impressive but if you think he’s going to be a big thing in the movie you might be mistaken. He’s a bad ass Decepticon for sure but the forces of evil Transformers is still very much run by the original leader Megatron who was very well animated in this movie in his new earth form.

Optimus Prime does finally have his new trailer which is jam packed full of weapons including his new Jet Pack. Unfortunately I haven’t seen a decent toy in production of this yet. I’m holding out for Takara to make a Masterpiece Movie Optimus Prime in time for Christmas. It’s not been announced yet but as predicable as Michael Bay using explosions in his movies.

There were a lot of characters missing from thr third movie. The Autobot twins didn’t appear in the movie as Michael Bay had said so he can keep his $25,000. Arcee is no longer and we loose a good few more Transformers in this movie.

If there is a fourth Transformers movie and there will be. It will either need to be a reboot, Prequel or kick off with Unicron resurrecting Megatron as his purple alter ego Galvatron. Saying that they brought back Megatron in the second movie so anything could happen.

Lastly Michael Bay, Thank you for bringing us this cinematic masterpiece and restoring faith in movies after Green Lantern.