The teaser Trailers seem to show some pretty big action scenes and from the first one it looked like we might even see Unicron but later trailers look like this movie will take elements from the Key to Vector Sigma episode in which Megatron uses Cybertron technology to transform Earth into the new Cybertron.

One strange twist which seems to have been noticed in promotional art is the merger of Optimus Prime and Bumblebee in some form. Below is a standee from the movie which Screenrant unearthed which features Oprimus Prime with a few yellow pieces which look like they may have been borrowed from Bumblebee. There could be a few explanations for this. But then we have the introduction of Hotrod, those Transformers fans who watched the original series and movie will know Hotrod became the leader of the Autobots at one point. We don’t need to know where he comes from as each movie seems to introduce new Transformers to the story.

In the original promo material and on set pictures he just looked like another sports car but in the latest picture it looks like he is based heavily on the robot design of Bumblebee.

In a way all the sub characters look a little similar but this guy has the potential to become the new leader of the Autobots. What if the reason he looks like Bumblebee with flames is because at some point in the movie Optimus Prime and Bumblebee do merge in some fashion and Bumblebee is rebuilt into Hotrod, Same bee body but with cool Optimus Prime flame designs and a new car model.

It’s possible and the concept art and promotional material do point towards some sort of new Optimus Prime / Bumblebee hybrid in the new movie.

We haven’t got a long time to wait to see for sure as the movie is due out June 2017. 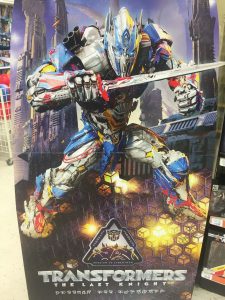