A trillogy seems like the best way to maximise money in movies at the moment, even the Hobbit has been stretched out and the first Transformers movies had a start middloe and dramatic end.

When Michael Bay was making Transformers 3 he never expected to be back for a fourth but here he is and it looks to be working. The challenge is making a fourth better than all the others. So far the human cast looks much better as he even has a real acter this time with Mark Wahlberg and Kelsey Grammer.

As for the meat of the movie Michael Bay looks to be putting together a movie version of Menasor. For those who don’t know Menasor he was the first Transformers combiner compremising of four high end cars and a black flat nose truck.

Menasor brought a whole new dimension to the cartoon and was one of the most wanted Transformers in the first three Transformers movies which we never got. If these three mystery vehicles seen on set are Menasor I for one would be in danger of exploding with excitment if I saw it in the Imax. 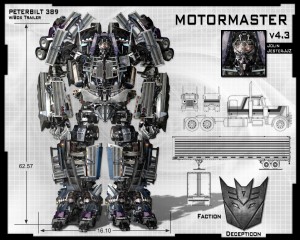