The Order is an action packed movie that follows a covert group of vigilantes. This group is often times the shadow to groups like the FBI and CIA.

The men and women of The Order, are trained, living weapons. They operate in secret. They have dedicated their lives to eliminating violent threats and imminent disasters. Their one focus is to fight to keep humanity safe from complete societal breakdown and maintain world order.

The Order has faced the worst of enemies, but are crippled by the discovery that this world assault they now face, is being lead by some of their very own.

Throw everything you thought you knew out the the window, you won’t know the good guys from the bad.

The Order Movie is more than just a reunion though, when most of the Power Rangers were cast it was because of their real martial arts backgrounds. In the TV shows we never got to see them show off their full potential as live action martial artists. With this movie we get to see some amazing actors do their own stunts and kick some ass in a way which never would have been possible on TV.

It’s almost like the Expendables but with some of the best martial artists in the business. It’s a wonder that one of the big studios hasn’t picked up this movie. 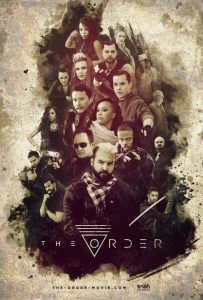