Although most comic book movies only take six months to film they can spend ten years in development with studios commissioning concept art from many talented artists. Thanks to one named Ed Natividad we have some previously unseen concept art from the Suicide Squad movie.

Ed has released a lot of concept art from the movie on his site, some of which looks like it made it into the movie and others that unfortunately didn’t make the final cut. One thing we can tell from Ed’s concept art is that originally the movie looked very dark. This is something we know was a fact from the first cut of the movie as it went through reshoots to add some humor to the final release.

From the concept art we can see the Joker being part of the final battle with the Enchantress. Possibly in earlier versions of the script the Joker gained control of her heart and commanded the Enchantress. One thing that director David Ayer recently said in an interview was that he regretted not making the Joker the main villain. Until now we had no idea that the Joker was the original main villain in the movie.

But the biggest piece of concept art comes as a modern DC movie universe Scarecrow. He looks pretty menacing and possibly a little too dark for the chosen tone of the movie. But one thing is for sure, in the past when we have seen characters cut from the concept art we usually see them pop up in the sequels. 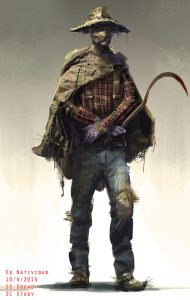