I’m trying to avoid spoilers for the next Spider-man movie because I’m worried any of them could fake and just get a lot of fans hopes up. Saying that the official trailer dropped and looked like we could see a whole Sinister Six show up including Doc Oc, Green Goblin,Electro and a few other fan favourite Spider-man villains.

This week we’ve seen a few grainy videos show up online via various social media outlets. The videos seem to confirm that both Andrew Garfield and Tobey Maguire are in the movie and have a few scenes together. That is if they are real. One or two of the videos have been debunked as just photoshopped behind the scenes videos from the old movies. Which to be honest wouldn’t be too hard as a lot of the scenes were filmed with a green screen making it super easy for fans today to replace it with anything and even make convincing videos.

Saying that here are a few examples of the leaks.

The first is this set which is said to be the set where they filmed part of the trailer where Green Goblin and Doc Oc show up on the bridge to fight Spider-man. It’s the clip at the end of the official trailer. Now note it’s set on a bridge with a blue background. 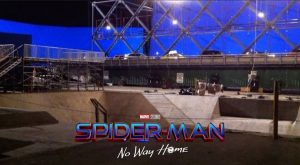 Here’s a video with what looks like some of the sets from Spider-man No Way Home. Again we can see the similar blue screen and a grainy picture of Garfield and Maguire filming a scene which does look a little fake.

This is the most interesting one though, we can clearly see Garfield talking to someone dressed as another Spider-man. It’s almost like that grainy scene we saw above but from another angle.

Both original Spider-man actors have denied being involved with the movie but between these on set pictures which all seem to match up to the bridge scene we saw in the official trailer, could we be looking at a massive scene where all the Spider-man universes combine in one?

One thing that does give these photos and clips credibility is that Sony have apparently been trying to remove them from social media sites. So I’m personally unsure of their authenticity but they do look promising. If half the rumours are true we could be looking at the biggest movie of 2021/2022.

The release date for Spider-man No Way Home is currently set for cinemas on the 17th December 2021.