Now the spoilers for Spider-man No Way Home have been hit and miss with a lot just being fan theory and some being confirmed by the actors themselves. We know we have a host of villains such as Doc Oc and Green Goblin and the possibility of a whole Sinister Six but fans are waiting to see if we will see more than one Spider-man. 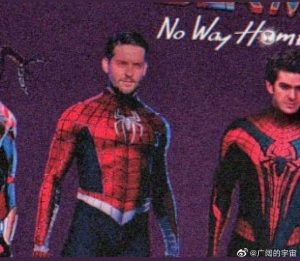 Neither Tobey Maquire or Andrew Garfield have confirmed if they are in the movie yet although we did have a few photos and videos which could be fake showing them on a blue screen set.

This photo surfaced from China social media which is strange because it’s not usually the place you find these Marvel rumours unless its the photo of a toy box which it could be.