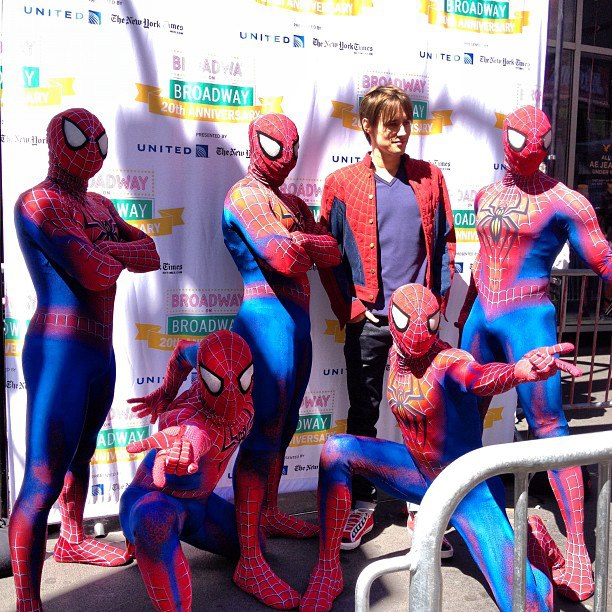 If you’re visiting New York and want to make the most out of the visit you can forget going to see the Empire State Building and buy some tickets for Broadways musical adaptation of Spider-man. I’m normally not fan of the theater in favor of more CGI but the live stunts more than make up for it.

Spider-man Turn off the Dark is one of Broadways most expensive shows due to the setup cost, stuntmen and amazing cast. It’s finished product is worth every penny to the audience.

It’s more than just a rock musical featuring people dressed up as Spider-man. To compete with the the movies they have gone all out on building up the best possible experience for fans, if you thought IMAX was immersive you really need to see the Green Goblin and Spider-man fighting a few yards above your head at high speed.

The show lasts about three hours which when you think about it must be a lot of hard work for the actors considering the stunts. I can’t imagine a harder working team or having so much fun watching a live musical either.

The show starts off a sub story about Arachne who is a Madame Web esc personality, her opening scene involves a bit of Greek mythology about how she was killed and transformed into the first spider. It’s a very powerful opening scene which I think is there to ground the audience for the rest of the performance.

Enter Peter Parker who was played by Reeve Carney (The Tempest) who would have probably kicked Andrew Garfield and Tobey Maguire ass if they all auditioned for the same movie role. He is backed up by about a dozen stunt men to help build up the Spider-man side of the role but as far as Peter Parker goes he’s really become the character and I don’t know where they get the energy for the doing two shows a day. For the rest of the cast we got Rebecca Faulkenberry playing Mary Jane Watson and Robert Cuccioli who played the head villain The Green Goblin throughout. Both great supporting actors who again would have had no trouble playing the parts in the movies.

Knowing there can’t be a sequel the writers have managed to fit in the origin or Spider-man, the Green Goblin and the Sinister Six all within three epic hours. It’s amazing what they can do in that time and makes the movies look like slowly paced cash cows.

Considering it takes six months to a year to film a normal Spider-man movie and get each shot right, the cast of Turn off the Dark do it twice a day and run through each show in about three hours making sure each word and step on stage is perfect.

Being a musical you might think that it can take away from the action scene in the show but when the music and lyrics are written by Bono and The Edge you can rest assured that it just helps intensify the experience. The sound track was so popular you can even buy the album from Amazon with previews available.

Tickets for the show range from about $50 all the way up to nearly $300, we sat in the Orchestra zone which was pretty much in the middle of everything. Saying that the cast literally fly around the whole theater so no matter where you site you will be in the middle of the action at one point or another. The show it’s self is reported to cost $1,000,000 a week to run. Considering that and the price of getting a taxi in New York its a pretty reasonable price for a ticket.

In its time on stage the show has had a few set backs, the initial reviews came out bad but I think it’s mainly says more about the reviewers than the show. As a performance it’s survived financial set backs being one of the most expensive Broadway shows to produce in history, five actors and stuntmen have been seriously hurt during live performances.

Even after all that the production had gone from strength to strength and is turning into one of the most profitable and highly amazing Broadway shows.

Although it is an epic show it does have a few down sides. The cast do everything they can to include the whole audience in the performance and you always want to see the show from another seat or see it from someone else perspective. It’s also not available on DVD, I’d love to be able to pick up a copy of the whole show but I have a feeling contractually it might not be possible.

Overall it’s highly recommended, the cast and crew and brought Spider-man to life and for anyone going to New York to get a view of Spider-man you can’t get any closer than this show. If you like comics and have one day in New York make Midtown comics on Times Sq your first stop and this your close second later in the afternoon.

The official Spider-man on Broadway website and the Facebook page which has some pictures of the audience getting involved. 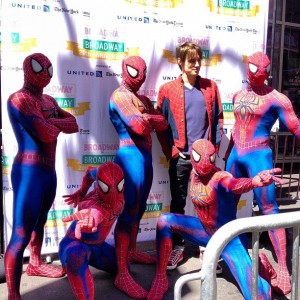 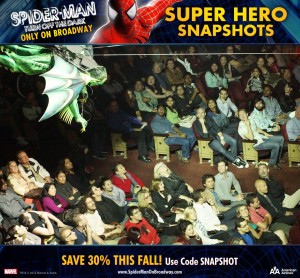 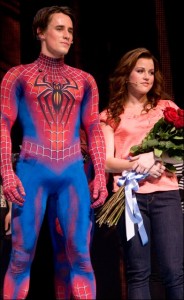