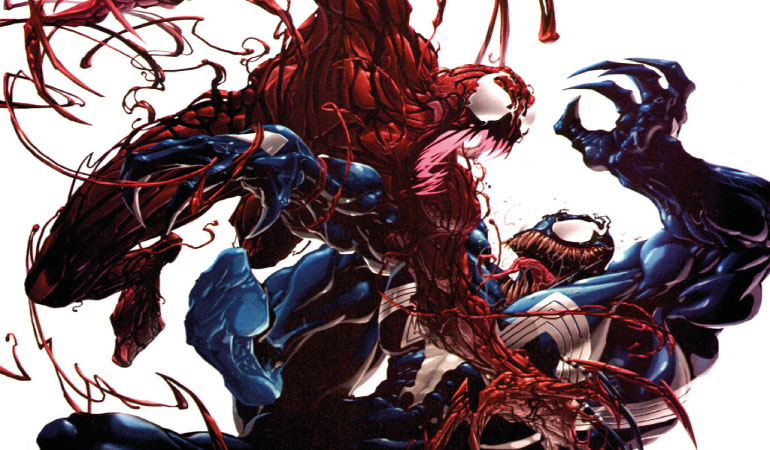 When Sony announced a Venom movie for it wasn’t too clear what kind of angle they would go for in terms of what side of the goodie / baddie spectrum he would align with.

In a new announcement it looks like the main villain will actually be Carnage.

The alter ego of Carnage will be Cletus Kasady, a vicious serial killer who mergers with the alien symbiote offspring of Venom during a prison break. When Cletus gains the powers of Carnage he becomes even more mentally unstable and also has all the super strength and and abilities of Venom.

It’s been a really interesting move on Sony’s behalf to bring out a Venom movie where he’s portrayed a the hero. It was once a fashion to save the most popular villains for the third movie in a trilogy, now they have decided to split him off from Spider-man and give him his own franchise. They have even cast Tom Hardy a pretty popular comic book movie actor after his role as Bane in the Dark Knight Rises, he’s much more well known that Tom Holland at the moment and it would be a good move to put them both in the same movie at some point.

Holding off on the super mega villains didn’t work for the Fantasic Four who never got to fight their Galacticus or Green Lantern who never saw a stand off against Sinestro.  It looks like they are following in the footsteps of Batman (The Michael Keaton one) where he faced off against The Joker in his first movie. Throwing Carnage against Venom in one movie is going to win a lot of fans over from day one.

I have to admit the choice of Carnage as the main villain is pretty interesting too. We will get to see how two people bestowed with an almost identical gift decide to use it differently. We’ve seen this in movies like Deadpool where he faced off against Ajax  or Iron Man where he faced off against the Iron Monger in his first movie. It seems to be a winning and tested formula that Sony are using.

One thing we will have questions about is how this will affect the Marvel Cinematic Universe. Aparently Venom isn’t part of the MCU but they will share the same Spider-man.

Thanks to THR for the news