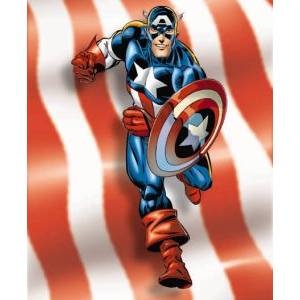 Fantastic Four’s Johnny Storm aka Chris Evans has been cast to be one of Marvels biggest characters Captain America.

Captain America probably has the most well rooted back stories. He goes back decades and is the leader of the Avengers Marvels super team.

Since Marvel announced the news I cant think of anyone who would be better suited for the part. He was great in Fantastic Four and really got into the part, also I’m glad they didn’t cast Justin Timberlake or Ryan Phillippe for the lead role in the Avengers.

Although none of the other cast has been confirmed they do have two awesome writers in Christopher Markus and Jack Kerby with Joe Johnston set to direct.

Now Marvel is moving towards the Avenges movie at full speed each day brings us closer to what could be either the best comic book movie ever or the worst, mainly because it has so much potential to go either way. It also gives us something to look forward to after this months Iron Man 2 release.

Unfortunately we probably wont see anther Jessica Alba Fantastic Four movie but she will probably show up in another comic book movie too soon.