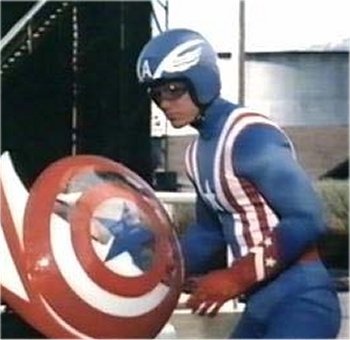 Marvel have put a lot of hard work into producing a few kick ass movies this decade. With the amazing job they did on the X-Men and Spider-man movies they have pushed the bar a little higher and put the whole Avengers line-up into action.

Out of all the Avengers Captain America is one of the most well known, he was brought into action in 1941 as the all American hero an has adapted to new audiences ever since.

Who else could play such a classic comic book character than the most classic comic book actor Chris Evans. He was a great Johnny Storm in both Fantastic Found movies along with Jansen in last years Losers movie, and to finish off this year he will be one of the seven evil exe’s Lucas Lee in Scott Pilgrim.

Jackson is probably the true star of the Avengers movies by managing to sign a contract to be in all the movies with bit parts and cameos. Although many fans argue that he doesn’t resemble the original Nick Fury.

Jackson was the base for the Nick Fury in the ultimate Marvle universe and has done a great job of reinventing the character and making him his own. The reinvention of Fury was welcomed by most fans after the 1998 Nick Fury : Agent of Shield TV movie.

Hugo is a true classical actor and first hit the comic book movie screen in V for Vendetta which he wasn’t too well known for but did am amazing job in bringing V to life.

He made a name for himself for not just being a bad guy but a real evil bring the apocalypse type bad guy by playing Agent Smith in the Matrix movies and voicing Megatron in Michael Bay’s Tranformers trilogy.

Atwel is probably best known for her part in The Duchess an the Prisoner series but in Captain America she could either have a tiny part in the movie or have a big part in the long run depending on where they want to go with the Avengers. In Mark Millers Avengers she has Captain America super solider child and was in the French Resistance during WWII.

Jones is probably more well known for Men in Black and the pretty awesome No Country for Old Men. In Captain America he plays Chester Philips who does recruits Steve Rogers for the Super solider program. It’s interesting that they cast Jones for the part as initially fans thought WWII would only play a small part at the start of the movie but by casting Jones as a WWII Colonel it may mean WWII will play a bigger part in the movie.

Star of Frasier and ER Tucci plays Abraham Erskine who first invented the Super Soldier serum which creates Captain America. Abraham died in the first issue he appeared in and was then cloned in later issues so he may not have a huge part in the movie.

Mainly known for his part in Gossip Girl Stan hasn’t done too many movies but he will play Captain Americas side kick, kind of like Robin to Batman or Jimmy Olson to Superman. Bucky was Captain America’s WWII sidekick.

Another star from the Duchess. Yes Howard Stark is in Captain America too, Tony Stark’s Father and co founder of S.H.I.E.L.D. It was mentioned in Iron Man 2 that Nick Fury and Howard Stark worked together in the beginning and this should hopefully fill in some of the gaps for the hard core marvel movie fans or at least lead to a few re-watch moment an easter eggs..

The guy from Desperate housewives and the Chun-Lee movie Neal will play Dugan. Dugan is another nod to Nick Fury having a bigger part in the movie as Dugan was part of Nick Fury’s elite team in WWII.