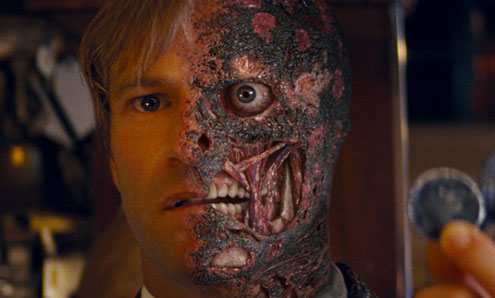 This years comic con has been a fountain of knowledge for the up and coming comic book movies. The first Dark Knight news we have had for months is just a teaser to what we have to look forward to.

Aaron Eckhart has confirmed he will be back playing Two Face in the next Batman movie as he told MTV news at Comic con.

Although a lot of general cinema going public will be thinking “Didn’t Harvey Dent die in the second film”. Any true DC comics fan can tell you nobody really dies in comics. Batman died last year and is currently in the wild west. Superman has died a few times in the comics and always returned.

At the end of the Dark Knight we see Harvey Dents funeral, but Two Face is more than likely still live and kicking in Arkham Asylum. Leaving Two face alive it leaves the doors wide open to a Long Halloween or Arkham Asylum movie.