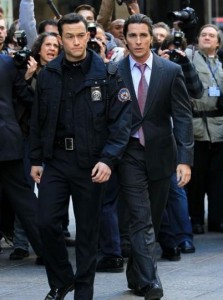 The Avengers movie gave a lot of comic fans a total wet dream as it teased us with individual movies and then brought them together for one awesome super team movie.

In terms of DC comics doing something like this it seems to be on the cards for a few years and would have worked really well but now David S. Goyer has said he wants to reboot Batman.

The Dark Knight trillogy was easily the most success DC and Warner Bros have had with any movie franchise to the point they could have made twenty of them and they could have sold. It was an amazing cast and also would have fit into the Man of Steel movie really well having the same tone and both films being made with Christopher Nolan pulling the strings.

If David S. Goyer does reboot Batman it’s going to be a real let down for fans who bought into him being able to write Superman and Justice League after what he did with Batman. Afterall we can’t give Goyer all the credit for the Dark Knight movies, he was responsible for Ghost Rider one and two also.

Part of me things this may be a smoke screen for a much bigger plan. Dark Knight Rises left us with a Robin who had the potential to be either Robin, Night Wing or a new Batman.

Three possible options to bring Christian Bale Back as Batman

2: Joseph Gordon-Levitt takes over as Batman for a few Justice League movies as a supporting hero in the team. Christian Bale then returns to take over and Joseph Gordon-Levitt does a Night Wing spin off. We had some great comics where Batman came out of retirement and I know Goyer who takes all his best ideas from the comics would want to do this.

3: Christian Bale comes back as Batman at the start of Justice League to hand over the mantel of Batman to Joseph Gordon-Levitt in a more formal way and doesn’t make fans have to fill in the gaps between movies.

Any way DC and Warner Bros decide to move forward I hope they decide not to reboot Batman right now. It’s not the right time and really not needed.