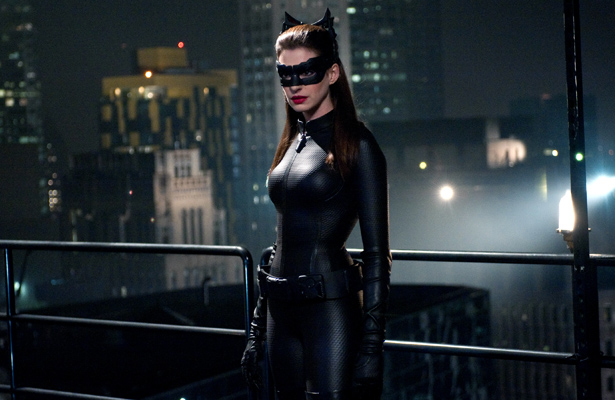 The movie starts off eight years after Harvey Dents death, Batman’s been retired in wake of the Dent Act which has put over a thousand of the Gotham’s most dangerous criminals behind bars and Wayne Enterprises is pretty much bankrupt due to unsuccessful projects.

We get introduced to a whole host of new classic characters from the Batman comics, some old foes return and a few new ones show up too. By now we all know Bane is the main villain in this movie but he’s not alone, in fact he has a whole new league of shadows following him around ready to die for the cause. But it’s all good, even though Batman’s getting old now he has a bit more backup.

With more explosions than than a Michael Bay movie a lot of action packed scenes this a totally epic Imax movie. Even the introduction of his new flying tank “The Bat” doesn’t seem too far fetched with the story and the development of his new toys.

With the introduction of Catwoman which really helps save the movie. Not that’s it’s bad by all means its an epic movie but following the Dark Knight and Ledger’s Joker it could never really compete.

Catwoman is the anti hero in the movie, she’s using her skills as a sneaky seductive cat burglar to help get her out of the mess she finds her self living in. She helps pull a lot of the story together as she develops into the only woman Bruce Wayne could actually have a relationship with. He’s got psychological problems she’s a little loopy and they get on supporting each other like a house on fire.

Anne Hathaway really doe play the best Catwoman ever, even out classing Michelle Pfeiffer in Batman returns. After trial and error along with fan feedback they got the costume spot on for the movie and they couldn’t have picked a better actor.

Tom Hardy does an amazing job as Bane, he’s a totally brutal psycho and even though he has been greatly reinvented for the movie he is still a fairly loyal representation of the comic version showing bits of smarts but still gets played like a puppet.

Joseph Gordon-Levitt who plays an honest cop in Gotham City helps set a lot of the story. With so many rumours of who he would actually play in the movie it’s almost so obvious even die hard fans would get thrown off the scent. By using him they way they have we could have a few spin off movies to help keep the franchise going.

With rumours of returning villains we do get a few but those fans like me who read between the lines and expected unused Ledger scenes or an epic re introduction of Two face you may be disappointed. Even with the running time of 2:45 they do a good job of fitting in what they do. At some points it even looks like they took some scenes from the Arkham City game.

Overall it’s an amazing conclusion for Christopher Nolans Batman trilogy, what happens next with the characters is totally open to so many possibilities. Nolan and Bale may even return for a Batman 4, a Catwoman movie has been talked about, a new Batman taking the cowl or even a Batman and Superman movie. Literally it’s left wide open.

Compared to the only other comic book movie which could compete this year the Avengers, The Dark Knight Rises could outsell, outclass and just kick its ass all over even if they do have endings which are almost too similar.

Overall 4/5 on the epic movie spectrum.