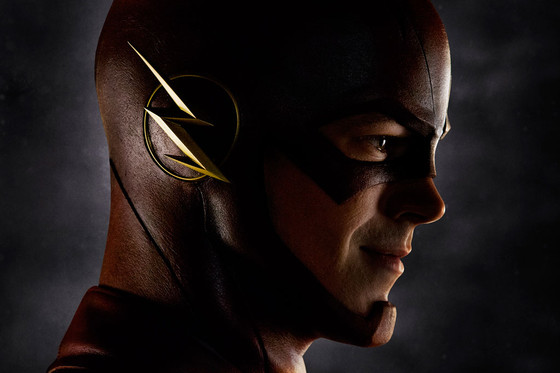 It looks like CW really mean business with the new Flash pilot. Not only are they going to show us a whole new origin of the Flash but they have also just released this first picture of Grant Gustin in the Flash costume.

Coonsidering how long it took Arrow to get a mask it’s impressive to see CW making the jump straight into the Flash costume. It took ten seasons of Smallville for Clark to suit up but this time CW doesn’t want to waste any time.

In the CW series which is due to start this year Grant Gustin will play Barry Allen in a whole new reinvention of the Flash story. It takes place in the same universe as Arrow which has also been linked to the Man of Steel movie universe.

The high speed development of the character might have something to do with John Wesley Shipp’s involvement in the show. John played the Flash in the 1991 TV show and some fans are wondering if he will some how hand down the power of the Flash and play Jay Garrick.

At the moment not much news has been released but going of what we have seen in Arrow and this epic new picture it looks like the Flash is going to be another show that’s much better than Marvels Agents SHIELD.