Whatever happened to the world’s fastest man 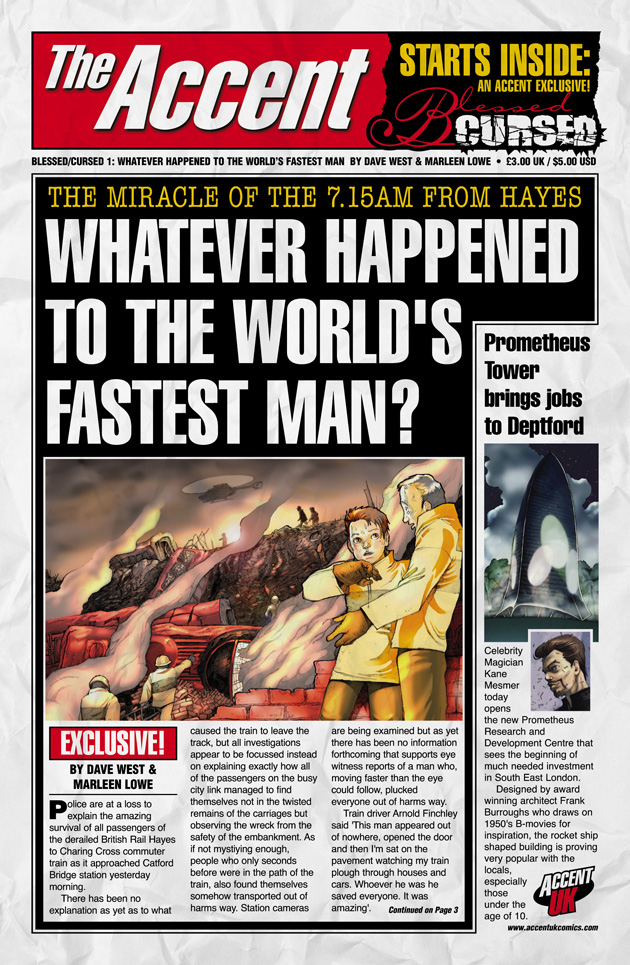 Thought Bubble this weekend was awesome! I picked up a whole stack of new comics and the first I read on the way home was Whatever happened to the world’s fastest man from Accent UK by Dave West and Markeeb Lowe

The book is a one-shot of about 40ish pages which should be on general release around February. If you like comics with a deeper story and something totally original and stretch the boundary of comic book heroism you will love this one.

The story takes place today and starts with a the “hero” of the story Bobby Doyle just being in the right place at the right time. Bobby has what writer Dave West calls a blessed curse, He has powers that give him certain advantages but also responsibility’s.

In the book Bobby works alone as he is the only one he knows of with powers and saves thousands from a central London terrorist attack in a very unconventional way.

Bobby’s first step into the super hero life in the book is when he is a passenger on a derailed train. He instantly stops time and moves all the passengers onto the side of the tracks. The only witness is the driver, who sees a flash of what he thinks could only be the worlds fastest man as Bobby opens the door to save him. As you can guess carrying passengers one by one isn’t the most super power fuelled way of saving people from a train wreck but it does the job for Bobby Doyle.

I can’t give away much more of the story because I wouldn’t want to ruin a single page of this awesomely written and pencilled book. But if an indie comic ever deserved a movie I think it would be Whatever happened to the worlds fastest man. I just wish they could have made it longer or left room for a second volume. Coming soon a review of Robots from Accent UK