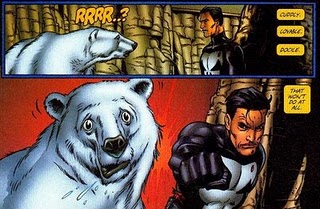 Frank Castle aka The Punisher could be one of Marvel comics most under rated characters. He has had more cross over’s than any other comic character I can think of. He doesn’t need any over the top mutant powers and he works alone. All this mixed in with the creative mind behind The Preacher and The Boys – Garth Ennis and you have a pretty kick-ass series.

The Frank Castle is probably the closest thing Marvel has to a Bruce Wayne as they both have a lot in common. The back stories are similar in the sense they lost family to crime. Also they are both angry and armed to the teeth with a thirst for vigilante justice.

In Welcome back Frank, Ennis’s pull no punches story telling takes the Punisher into a whole new world of pain. If you liked the Preacher for its outrageous scenarios and great use of the graphic novel and a fairly in ratable medium you will probably love Welcome Back Frank. No wonder the movies didn’t put Frank Castle in the best light, it would be impossible as the movie medium isn’t ready for the un-edited Garth Ennis imagination.

In Welcome Back Frank the Punisher becomes one of the luckiest and most resourceful fictional characters out there. He is a one man army against a city of crime and most of the time in this book he doesn’t even need his gun. Killing with anything thing he can find from polar bears to pizza, it isn’t what you might expect and well worth a look. It has the power to make even a hard-core DC or Vertigo fan think Marvel have finally done something new with this book.

The Punisher – Welcome back Frank collects 12 issues of one of the better Marvel Knights series. Written by Garth Ennis, art work by Steve Dillon with inks by Jimmy Palmiotti.