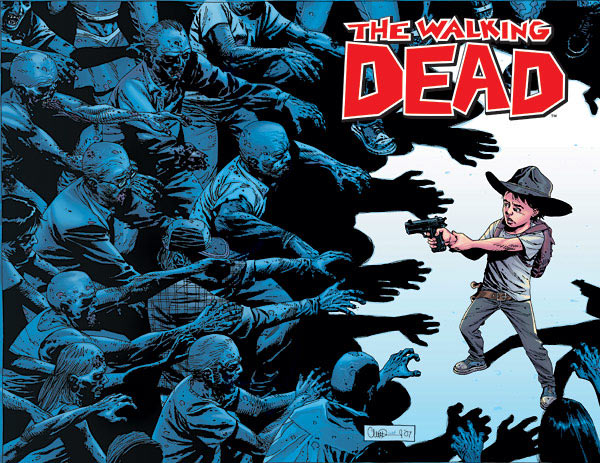 Image Comics have announced they will be reprinting the entire series of Walking Dead starting in January. The best news is they will be released weekly so you only have to wait 168 hours between issues.

The demand for Walking Dead reprints has been growing since the TV series was announced and it will give all the new fans a great opportunity to jump on from the start and all the long time readers to pick up the issues they missed.

Can’t wait for January? Pick up the TPBs over here Walking Dead TPB

“And what better way to jump on than with the very first issue? Making this series available in single issue form will make it easier for new fans to jump on board and for old fans to fill in any gaps in their collection.”

January will kick off the reprint with the first four issues.

Starting in this issue, Rick Grimes awakens to a world he’s not prepared for. This small town cop must now fight the forces of the undead while he searches for his missing wife and son. This is the issue that started it all!

Rick Grime’s horrific adventure continues. Everything he knew is gone, and the search for his family begins. Rick sets out for Atlanta, the last known location of his wife and son.

Now reunited with his family, Rick Grime’s focus shifts from survival to protection. It’s one thing to know that you have to watch your back every second of every day. It’s another thing entirely to have to worry about losing your family in the blink of an eye.

It is decided that in order to survive… every person at the camp should have guns. As it is, they don’t have enough to go around and the only place to get more guns is the city, but it means certain death to go into the city. Is Rick crazy enough to risk his life for the good of the camp?