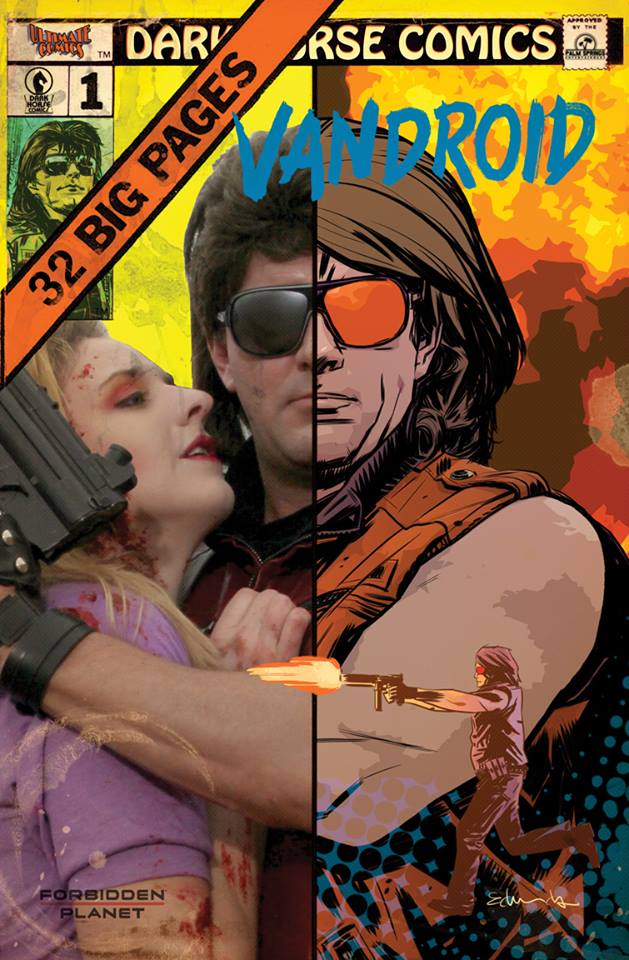 Vandroid is a new Graphic Novel published by Dark Horse comics and it’s based on an unfinished movie script from 1984 which was an amazing concept. A powerful AI system built for war which can kill to survive gets a new lease of life in a one of a kind cybernetic body based on its creators best traits. Vandroid goes on to fight corporate baddies who make perfume as a front while stock piling enough chemicals to start a war.

The original film was partly filmed in 1984 and was a very ambitious project which started being made in California with the second part of the movie being made in Italy. A few weeks into filming a fire would destroy the film and its studio with only a few promotional pieces surviving.

The movie was set to be a major motion picture with toys and even a video game to go hand in hand with it but sadly it was all lost… until now.

Vandroid the graphic novel was based on the original script and written by Tommy Lee Edwards (Batman, Daredevil, Hellboy) and Noah Smith with some awesome artwork by Dan McDaid (Catalyst Comix, Superman).

The story pulls you in within the space of a few pages and runs at a great pace for the five collected issues. With the movie being set in the 80s its almost like the artwork follows suit. The whole book has the 80s running through it from the story to the coloring and it makes it all that more interesting to read.

“It’s a resurrection story. Life. Death. Life. Death. Life again. Then lots of death, a plague if you will. It’s a postmodern/posthuman Jesus story. It was all on page, the whores and the miracles. A sort of neo-Catholocism. What would Jesus do if he returned today?”

If Jesus was an android in the 1980’s I’m sure his story would follow something similar to Vandroid.

A lot of work has gone into this book and the story has been waiting thirty years to be told. As a self contained story it has the re read factor and makes me want to read it all over again as soon as I’ve finished just to take in the artwork and original concept again.

If you loved films like Universal Soldier, Terminator and Tango and Cash this comic will find a place in your heart. It’s a story even a fire couldn’t stop being told.

The characters in the story are instantly identifiable as any number of good guys and bad guys from 80s movies. Vandroid is the perfect second chance story. He was designed for war but given a second chance and a new design with space for a soul he makes the best of what he has and saves the world from evil corporate war mongers.

For a fairly cheesy story it has a lot of connotations to the 80s sci-fi genre and low budget but high impact movies like Cyborg and Cyborg 2. The graphic novel is like a love poem to all 80s action movies which I sorely miss.

Comic adaptations of movies have been around for a long time and with new popular series like Big Trouble in Little China opening doors for more comics like this I hope we see more like Vandroid if not a whole new sequel to the first volume.

Overall I wouldn’t change anything about this book other than make it a long running series. Vandroid has so much potential and in era where comic publishers should all be creating new and exciting series most seem to just be making comics to get a film deal. It’s nice to read one which had a film deal and ended up just being an awesome comics.

Find a copy on Graphic-Novels.net