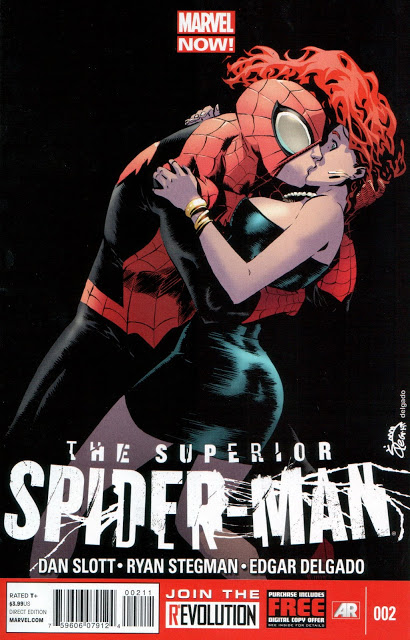 "Innovative and Superior in every way"

The Superior Spider-man follows one of the biggest milestones in Spider-mans history with the death of Peter Parker in Amazing Spider-man #700.

After a few weeks I thought the whole event would have been forgotten about but now nearly a year into the story Marvel are still running with it and I wanted to catch up to see how it went. Originally thinking it wouldn’t be worth reading now I think it’s one of the smartest turns Marvel has done. Superior Spider-man My Own Worst Enemy volume 1 contains issues 1-5.

Usually when someone as big as Spider-man dies in the comics it takes a few weeks for time travel or some sort of cloning to bring them back. With Superior Spider-man it’s very different. Spider-man still lives on but Peter Parker is still very much gone. What we have in return is Otto Octavius given a second chance to redeem himself after a life of criminal acts. He’s a smarter Spider-man who is a lot less forgiving and knows the criminal mind inside and out.

With this volume Peter Parker is still guiding Otto Octavius through his subconscious and stopping him from doing anything too drastic. Otto decides that Parker was holding back when being Spider-man and he could have organized his priorities a lot better.

Otto starts with his old gang the Sinister Six, now a newly formed group he still knows all their moves and decides to take them out of action using his background knowledge of how the group work. By doing so he starts to win the city back and decided to appreciate the public coverage of his work and even gets J. Jonah Jameson on his side.

The next criminal he meets is the Vulture who may be one of his most evil foes as he steals youth from his victims and now he brain washes a group of kids to be his henchmen. This to the new Otto is unforgivable and we start to see how far he will go to stop his enemies from returning to crime.

Just when you think it can’t get any better Spider-Oc follows escaped criminal Massacre who is on a killing spree accross New York. We see a bit of the Punisher come out in this new Spider-man as he shoots him at point blank range. Ending it like that is a real teaser to what we can expect in the latest issues.

Overall it’s an amazing story and I will soon be reviewing the rest of the series.