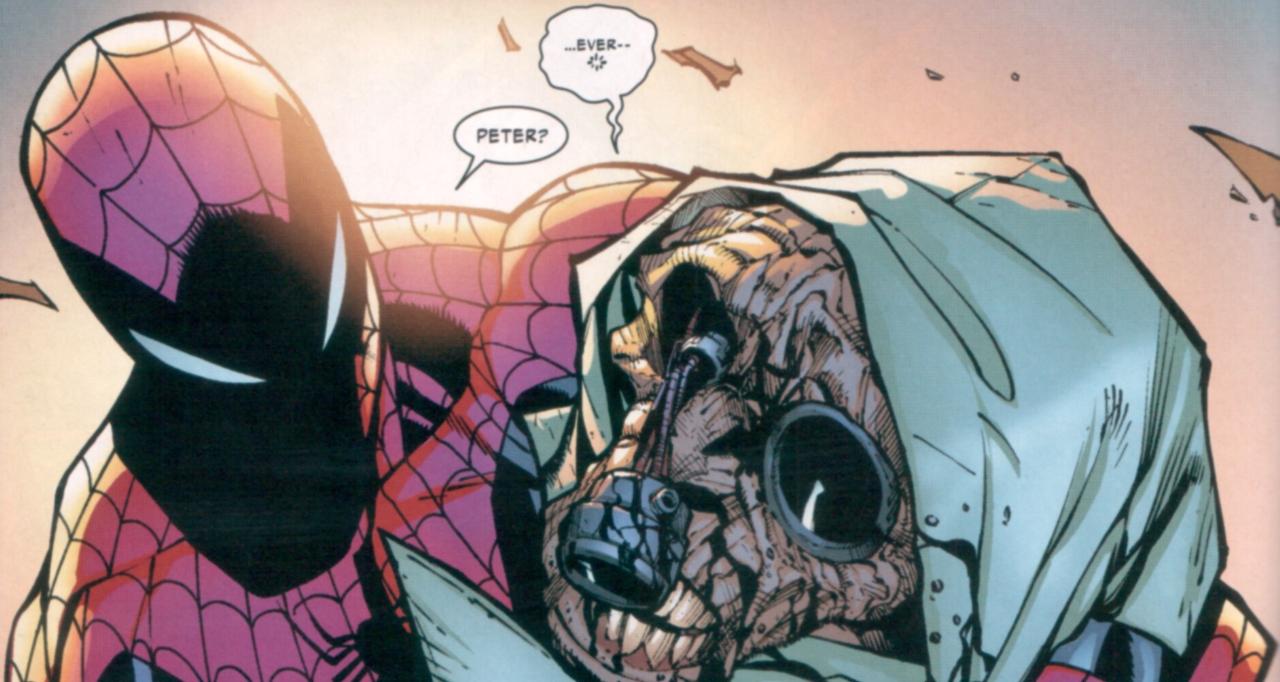 Spoilers ahead When DC rebooted the entire Universe they pretty much just ended each issue. When Marvel ended the 700 issue long run of the Amazing Spider-man they ended it like no other comic icon I’ve ever seen, especially for the death of such an iconic hero.

Issue #700 starts off with Peter Parker’s mind in Docter Octopus’s dying body with a few hours left to live meanwhile Doc Oc is living it up with Mary Jane in his new super powdered full of life body.

Both Marvel icons make the most of the situation while Peter breaks out of prison to get his body back Doc Oc does everything he can do to give Parker the run around in is old decrepit body.

In the final Battle Doc Oc has his memories fuse with some of Parkers and turned into a good guy with a last chance of redemption while Peter Parker is left to die in an old battered body.

At this point I was wondering why Marvel chose to kill off Peter Parker two years in a row, this time following last years Ultimate Spider-man #160. Although the sales figures would probably give a good answer.

I’ll happily read DC or Marvel I think they both have good and bad times but one thing I will give to DC is they know how to kill off a comic icon. I don’t think either of the deaths of Spider-man have given Peter Parker a good send off, nothing compared to the deaths of Hal Jordan or Superman.

One thing I did like was how unpredictable it almost was, I’m sure countless comic heroes have swapped minds with villains in the last 50 years but this is the first time I’ve seen them not swap back and kill off the good guy.

Overall it was a very creative ending for the Amazing Spider-man #700. Not as epic as it should have been but it was original and unexpected.

One thing I am wondering at the moment is how long Marvel will want to continue with the run of Superior Spider-man. Doc Oc as a super hero could be very interesting for many reasons, firstly he has the memories of a villain, knows how they think and all the secrets of Spider-mans enemies. They could also play the whole quest for redemption card with Doc Oc which could be cool.

Where does it leave Peter Parker? we got to see a reunion with Gwen Stacy, his Parents and Uncle Ben in this issue. He’s obviously in a happy place now but I still think they could have ended the Amazing Spider-man with a bit more of an epic ending, somewhere where he dies saving the world not just buried as his arch nemesis in an old and battered body while Doc Oc moves in on Mary Jane and his life.

I’d almost like them to bring back Peter Parker but not in the DC reboot style, maybe one of those alternate dimension Parkers might jump through or Doc Ocs memories will be rejected by his body leaving Peter Parker back in his rightful place.