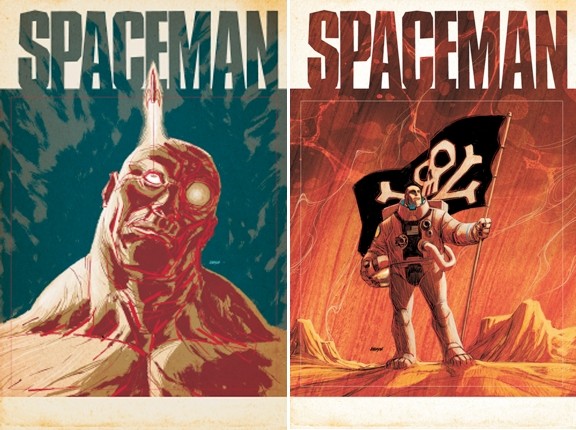 Spaceman is another modern Science Fiction comic, similar to Elephantmen, it’s set in a post apocalyptic future set around genetically modified people. Instead of war these spacemen have been bread to have stronger bones and have the ability to work on Mars where the gravity is much stronger.

Published by Vertigo it’s a nine issue series written by Brian Azzarello and illustrated by Eduardo Risso. Both of which have worked together of the last ten years on series like 100 Bullets.

The first thing that attracted to me to this series was the $1 first issue. It’s a great when publishers are willing to take the hit to get a new series out. In a lot of ways it shows how much confidence they have in the chance you will re buy other issues.

The story is about a retired genetically modified spaceman called Orson. He’s got no misconceptions about who he is. He’s a simple scrap metal collector who finds himself in the middle of a celebrity kidnapping. He’s not the typical hero but the kind that lends very well to the comic science fiction genre.

Orson isn’t the only spaceman left from the trials, other ape-like astronauts are also scattered around but in the time this is set Orson is very much on his own. During the first issue it’s a brief introduction to where he came from and what a typical day is like for a scrap metal collector form the future.

The first issue ends with him rescuing the missing child celebrity called Tara from a boat on fire and her. The second issue stays in that few moments as Orson finds this is not a normal day and kicks ass.

Looking through the Previews magazine it looks like Orson will end up going on the run but where the series is going to end only Brian Azzarello knows.

Overall Spaceman comes highly recommended the art work is amazing being so dark but awesomely vibrant. Azzarello’s reinvention of the English language is something you could only get away with in a comic. It’s got the reread factor, you might need to read some pages more than once just to figure out the futuristic lingo.

Spaceman has already got me hooked and has a place on the standing order. It’s one of many awesome science fiction comics out at the moment, It’s like space mutants are the new zombies.