Sin City Hell and Back 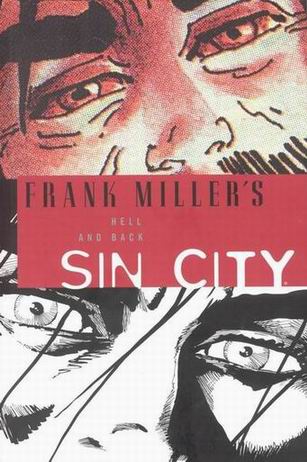 With the last Sin City book in my hands I wasn’t sure what to expect from the closing book in Frank Miller’s beyond amazing series. The previous six books have had one continuous story running through. They are all tragic love stories based in a city where corruption rules and the innocent are made into victims.

The last book Hell and Back is the biggest in the series and I was super excited to get round to it, so much I almost didn’t want to read so I wouldn’t have to say goodbye to the series. Miller has written an awesome conclusion to the series and if they get round to making the Sin City 2 movie its going to make one hell of a film.

Then main characters in this book are Esther who like most females in Sin City are described as having “that perfect body” but shes depressed and tries to throw herself into the sea to escape something or someone. Lucky for her Wallace who drives past sees her and dives in the freezing sea to save her.

Wallace doesn’t belong in Sin City, he is an ex solider and owner of a congressional of medal of honor. He is a war hero and was just trying to pay his rent when this whole pile of trouble fell on his lap.

He takes Esther back to his apartment and she brightens up, she’s no longer alone in Sin City. At that point Miller has brought you back in with an amazing character introduction and line up to another mysterious story. The book also welcomes back the blue eyed assassin Delia who is as deadly as she is a “ravishingly beautiful nymphomaniac”.

Esther is a similar character to Nancy, shes sexy as she is mysterious, and has a past as dark as her future. Wallace has the same luck with women as Marv and Dwight but with the killer instinct of Meho. He’s an old school hero and goes to hell and back to save a stranger.

Without spoiling the rest of the story it has a few awesome twists towards the end, you see cops which aren’t totally corrupt and people trafficking in it’s extreme. There is also an amazing chapter where they shoot Wallace full of drugs and he trips out during a shoot out which features Captain America, Hell Boy and a few other comic cameos.

The book features Frank Millers Sin City at it’s best and is probably the most realistic in the series. I imagine it would have been hard for Miller to top this story but I’m still hoping he comes back to write more. Hell and Back also gives an answer to all those wondering if people can ever leave Sin City with all it’s crime and bad weather.

More Frank Miller to come soon… hopefully
Dark Knight : Boy Wonder looks to have been canceled or delayed even more after being over censored, Dark Knight Holy War was canceled but we do have the 300 Prequel to look forward to.