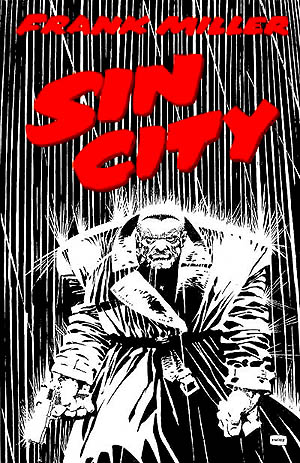 The Sin City movie was a total masterpiece of cinematic comic goodness. I don’t recall anybody having a bad review of the film which was also co-directed by the great Frank Miller. Frank has proved he can write comics, illustrate, direct movies, write screen plays and pretty much anything else he wakes up wanting to do day to day.

The first Sin City comics start with The Hard Goodbye which follows Marv from start to finish. From his first time he meets a girl called Goldie in a bar which leads to the perfect night till he wakes up next to her lifeless body and the police knocking on the door.

The first book follows on with Marv trying to make sense of what happened, he loves puzzles and and the night turns from one lucky lead to the next.

After watching the movie you will be able to hear Mickey Rourke’s voice while reading the book as the dialogue is pretty much line for line from the comic.

One benefit I found from the book is you get to see Frank Miller’s original artwork and it’s just Marv’s story start to finish. You also get to see the story fold out in a lot more detail than the movie.

The book is fairly reminiscent to Franks Dark Knight books but without the DC editing and restrictions, he hasn’t smoothed over any chance to get some uber violence in there. It’s also Miller’s classic old dark rainy city setting to add more lost and lonely placement to the story.

Going back to the artwork in the book is an amazing example how you can give so much dimension to a black and white comic. It’s also stepped away from the old speech bubbles through the comic as it’s mainly following one persons Marv talking to himself trying to workout answers to each question he finds, as Ronin another of Frank Miller’s classics does.

Marv isn’t a super hero in the cape and tights sense but he is a pretty amazing hero in my book.