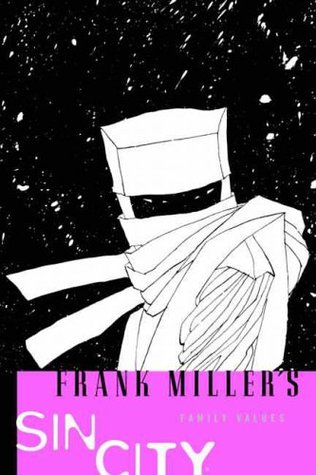 Frank Miller has always been known for his brutal and unsettling stories. He gave a whole new definition to the Dark Knight in All Star Batman and Robin.

Sin City is one of Millers most successful creator owned works and it shows him at his best, as he doesn’t seem to have to hold any censoring or worry about editors cutting out all the best bits.

But as far as dark stories go That Yellow Bastard really takes the prise and I think from that he wanted to take Family Values into another direction.

Compared to the previous Sin City books it’s much softer and more of a mystery than the normal shock horror kill-fest.

The story follows Dwight and Miho who are investigating a mob hit at a dinar. From the start all you know is Dwight is working on behalf of the girls from Old Town with Miho as a silent body guard.

When Family Values was released it wasn’t serialised as the previous books but just one complete volume. it defiantly breaks the themes of the previous books which I think could have been because Miller had already taken Sin City as far as he could with That Yellow Bastard and wanted to try something in a different direction.

I have to admit I miss seeing the odd Marv cameo but it is a great Meho book as its full of her silent kill attitude and she spends most of her time kicking-ass in roller skates with a samurai sword.