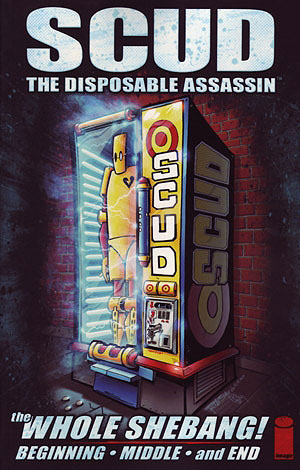 If you haven’t heard of SCUD before I am happy to be the one who introduces you to the awesome work of Rob Schrab. For a 24 issue comic series it took nearly 14 years to be completed due to a gap in the middle when the comic going off on a bit of a tangent. But in 2008 the comic series was finally finished with a 4 issue tidy up which closed the comic on a high.

The story is based on a pre apocalyptic future where society has deteriorated into a world where people hire assassin robots from vending machines to off rivals. SCUD is one of those assassin robots who realises he will self destruct upon completion of his mission to kill Jeff a mutant who is causing trouble for a big evil company. So in an attempt to stay alive he finds a loop hole in where he can shot off Jeff’s limbs and keep her on life support to keep them both alive.

The story then goes on to leave SCUD with no money to afford the life support so he keeps up the assassin work to pay for Jeff’s live support fee’s. Well that is basically just the first issue the rest follow with werewolves, zombies, time travel and a group of crazy friends who help SCUD along the way.

Inspiration of SCUD comes from a lot of sources such as cult horror movies and Star Wars, in fact I always thought SCUD looked like a cross between C-3PO and IG-88 from Star Wars with the personality of Han Solo.

The entire collection was collected in SCUD The Whole Shebang which is currently available on Amazon and was until recently available at Forbidden Planet but has sold out, fingers crossed for a re print.

The action figure is also available from Shocker Toys