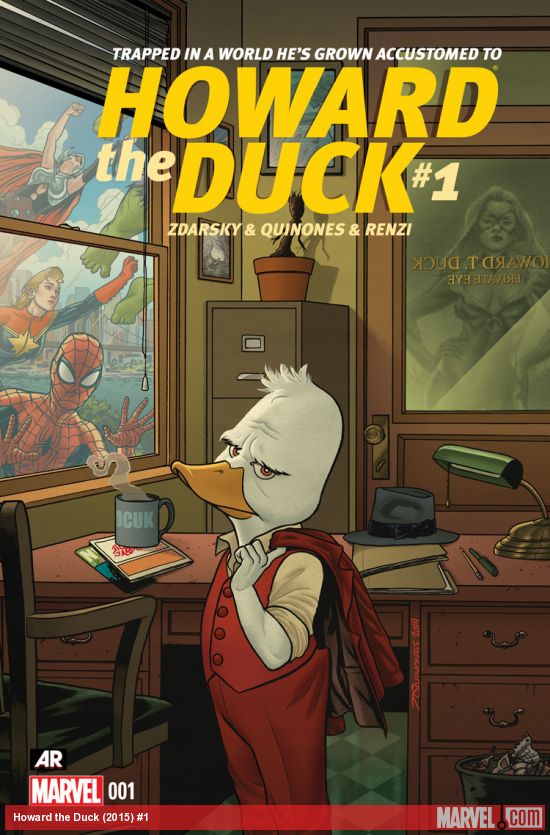 "A great start to a new series."

For me Howard the Duck was a movie before I was introduced to comic side. I’m not talking about the post credits scene from Guardians of the Galaxy but the 1986 Lucas Film production with Lea Thompson which was one of the first successful comic book movies.

Marvel have brought Howard back for a whole new 2015 series which puts him trapped on Earth trying to run a private investigation company.

The comic is written by artist Chip Zdarsky and drawn by Joe Quinones. As far as I know it’s the first time these two have worked together like this on a project and it’s worked really well. Chip who is more well known for his artwork has made a great transition into writing. Joe’s take on Howard couldn’t be better as it keeps close to his original comic look, wont offend fans of the movie like myself and gives him a modern touch.

It’s a comic which will appear to everyone on the same level. It has a lot of humor introduced what Howard is all about with his one liners and a few classic lines from the movie. For anyone who hasn’t read a Howard the Duck comic before or know who he is the issue also features cameos from Spider-man, Black Cat, She-Hulk and the Guardians of the Galaxy.

It’s always hard to judge what a new comic series will turn out like just by reading the first issue but I’m a little put off by this issue. I’d love to read a Howard the Duck series and would be happy to subscribe to a subscription but a few things have put me off this issue.

For me Howard has a lot of character and has a great back story. He’s an original hero and master of quack-fu and is also a bit of a ladies magnet. He could easily carry a new series by himself and needs a good clear back story established.

I’d have really loved this comic if it took him back to his home planet and went over his whole arriving on Earth then trying to find a job just like in the movie. Instead Marvel have filled this one with cameos and it almost makes Howard look like a supporting character in his own series.

Overall I’d like to keep reading this series in the hopes it gives Howard more focus. He’s an awesome Marvel character. He comes from a planet where Ducks evolved instead of Monkeys. To me that has a whole world of possibilities, what if he returned and there was a team of Avengers but they were ducks. There is loads of potential with Howard T. Duck and I hope Marvel finds a way of exploring even just a handful of it.

For those who haven’t seen the movie yet it’s well worth checking out if you can find it. He will likely be in the next GOTG movie too as he is way cooler than Rocket Raccoon.