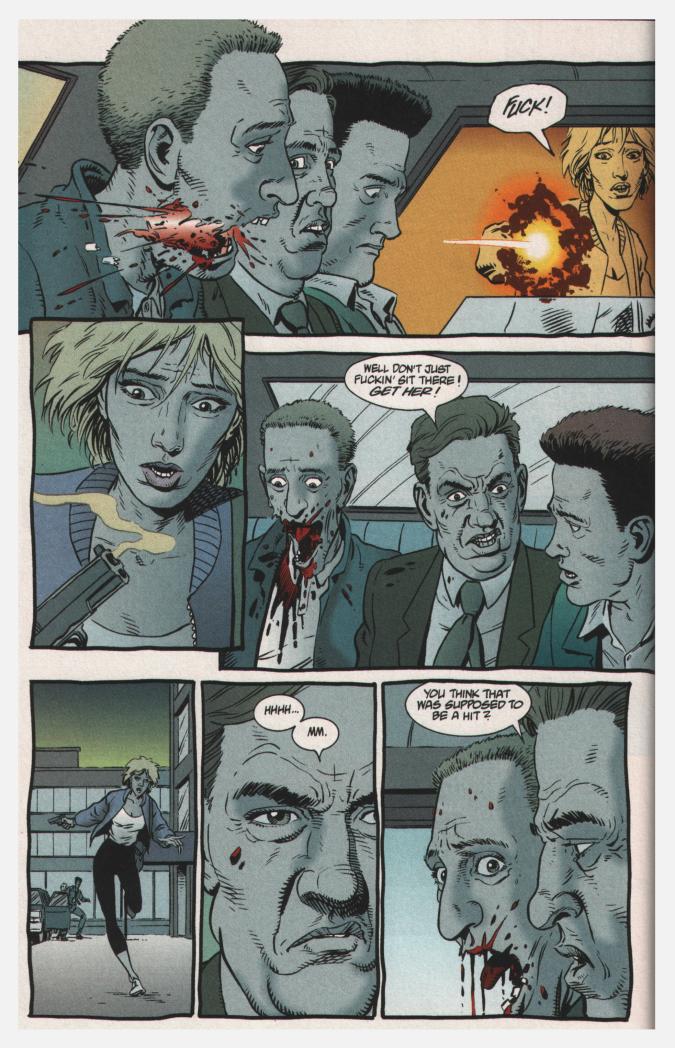 I love it when comic writers use the medium to its full story telling potential, you can get away with things in comics that movies, TV and those books with no pictures in could get away with. The Preacher defiantly raises the bar of bad language and over the top comic book violence.

Written by Garth Ennis who has also worked on titles such as The Boys, Punisher, Judge Dredd and Hellblazer has done an amazing job on the Preacher by creating a story which entertains the comic book reader in you who just wants to be shocked but also likes well written developing character development.

You don’t get much from the title of the book so for a brief run down of the first volume and its main characters.

The Preacher starts with Jesse Custer – a preacher from Texas who one day in church was in a tragic accident which left him the only survivor. An accident which followed a demon and angel having a baby called Genesis which now inhabits Jesse and gives him a special power, the word of god.

The word of god isn’t the conventional comic book hero power, he doesn’t shoot claws out of his hands, he cant fly, he can’t even run that fast but he can tell people do to anything he wants.

Initially it doesn’t sound too exciting but even from the first few pages you can easily get hooked on the characters.

Cassidy – the original vampire with a soul, I’m not sure what his back story is but he adds a lot of comedy to the comic. He’s really old and only eats those who deserve it.

The preachers ex girl friend Tulip, from the first book all you know is she is in some sort of trouble, carries a gun everywhere and wants to know why Jesse walked out on her to become a preacher.

As for the main story they basically travel around trying to find God who went missing at the same time Jesse got his powers. The Preachers features some amazing villains from the start such as the Saint of Killers who never misses and will kill anyone in his way. Also add to the line up Arseface, a deformed teenager who thought he would follow in Kurt Cobain’s foot steps and blow his head off but some how survives with a face which looks like an arse.

Overall it’s an amazing book up there with the likes of Sandman and Watchmen. Garth Ennis has done an amazing job of piecing together this story that I can’t fault on any way going off its first volume and its no surprise its published by the comic book legends at Vertigo.