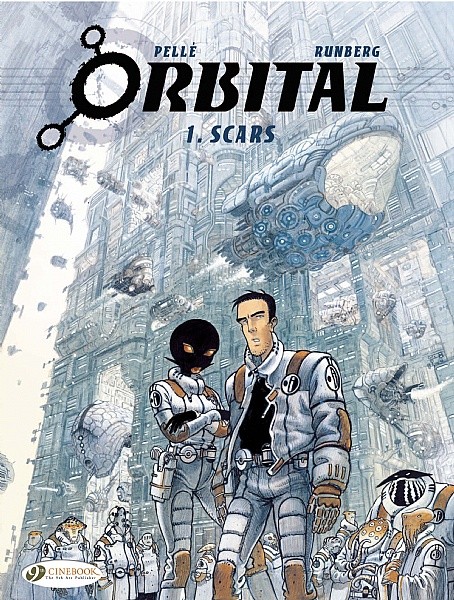 "A fresh Sci-fi from France. Epic artwork to go with an awesome story."

There really aren’t enough science fiction comics out at the moment but one I have come across recently is Orbital written by Sylvain Runberg with art from Serge Pelle. The original book was published in France and due to its success it was translated into English by Cinebook.

The story is set in the 23rd Century where the people of Earth have come in contact with numerous other alien races and have joined an intergalactic organisation set up 8000 years ago. Another race which has just joined the organisation is the Sandjarr, they has avoided intergalactic politics until they were at war with the humans.

Orbital follows Caleb a Human and Mezoke a Sandjarr both special agents trained and tasked to keep intergalactic peace. They do this by getting in the middle of trouble from all sorts of warring factions.

The English version of the series doesn’t seem to come in single issues just the larger European trade paperbacks. So far five of the six books have been translated and are available online and in most good comic shops.

Story wise for a Science Fiction book it’s fairly easy to follow, the language isn’t too sciency and the tone of the story is kind of an X-files Mulder and Scully relationship but set in a Star Wars meets Star Trek type galaxy with some awesomely designed alien races. There is a lot to take in at times with the whole political side to the story but Runberg does well to add a lot of action into the story to break it up and keep you interested.

The artwork in this book is totally amazing from the alien designs to the backgrounds and alien ships, the artwork is very clean and has a very high level of detail. The colouring is all vibrant and blended in to match the mood of the story.

Overall Orbital is an great read if you’re into Sci-fi like Star Wars or Star Trek. It’s one for mature readers just due to so much going on and the political can be hard to pick up on. For anyone who likes aliens in general the artwork and designs are very unique and makes you just want to pick up a pencil and paper and get drawing yourself it’s really inspirational work.

For more on the English version of Orbital visit the Cinebook site.