This is a total must read for those of us hooked on playing the 1998 Zelda offering Ocarina of Time. The story is written by the same team behind the Manga A Link to the Past. Although this game was one of the later ones this was the first Zelda Manga the Akira Himekawa team made.

I grew up playing games like this and got into comics much later, I still loved comics but didn’t appreciate them as much as games back then. Comics being full of creative fruits for the hungry mind work in a similar way to video games and capture the imagination in the same ways books based on games like this work in so many ways.

This manga is more than just a translation of the video game story to a comic. The way it’s written compliments and expands the games story by giving it more depth. Computer games even RPGs can only go so far with story telling and that’s what I love about this book. It expands on the relationships between characters and fans of the game get to see the same events but with extra dimensions.

One example of how the book expands on the story would be the Volvagia fight. In the game Volvagia was just a giant dragon guarding the fire temple, an epic fight but just another temple boss. In the book Volvagia was a baby dragon which Link rescues as a kid and raises as a pet.

During his seven year sleep Ganondorf uses his evil magic to turn the baby dragon in the fire temple boss which link must had to behead, its a very emotive chapter in the book and a great example of how well Akira Himekawa has translated the story from pixels to pages, giving something new to an already familiar story.

Compared to the Link to the Past Manga this is made with a lot more care. I get the feeling the creators actually played Ocarina of Time but may have just read a guide or something for A Link to the Past. They have spent a lot of time on developing the original story from OOT. The story and translation reads a hundred times better and is a much more interesting read while complementing the games events with more detail and skipping over a few minor bits.

The story itself is also spread over two books giving it more time to develop than LTTP and the artwork for the first in the series is super impressive especially the evil forces of Ganondorf. They have come up with some amazing interpretations of the characters in manga form, for the first book they wrote in the series it sets the bar very high.

If you played the game and still have fond memories or the award winning story the book is a must buy. It brings back all the memories of playing the game through along with making parts of the story clearer and adding a few twists along the way.

Overall it’s restored my faith in the series after the slightly less impressive Link to the Past but there will be more reviews of Zelda Mangas in the near future and thanks to Viz Media for the translation and releasing the series. 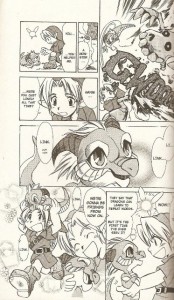