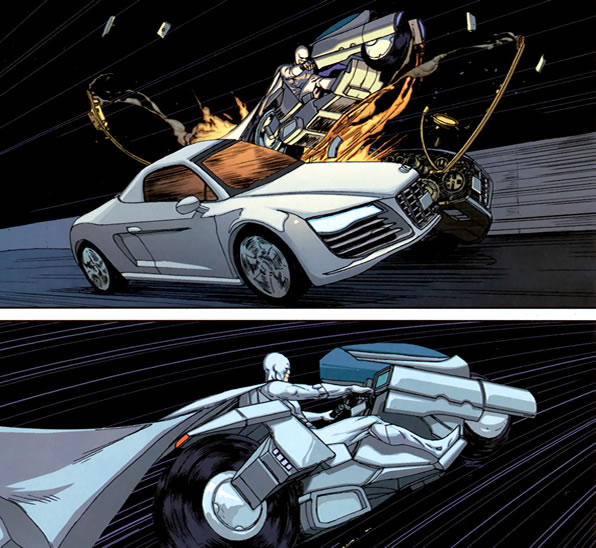 Mark Millar is one of the great names in comic’s at the moment. He has done some really original creator owned work like Kick-Ass and Wanted along with Superman : Red Son which has an awesome ending (provided by Grant Morrison).

He even made an original spin on the Avengers with his work on the Ultimates. It showed clear fast paced character development along with a cool alien invasion story topping it off with a super hero domestic between Giant Man and Wasp.

Nemesis issue one was pumped with great PR and looked awesome on the cover with tag lines such as “What if Batman was a c#nt” and “Makes Kick-Ass look S#it” but the first issue had amazing artwork but story wise was just pants! yes I said the P word.

I decided to hold out on a review as it was only a four issue run and the second issue was said to be amazing. I was tricked again into buying into this series more.

If you want to know his origin, just pick it up on the shelf and read page 3, it’s probably one of the most detailed mini origins to a character I have seen and one of the great things about Millar’s writing style. Similar to the way he managed to introduce all the Avengers in six issues of the Ultimates.

Moving on I think the joy Mark Millar gave me in the Ultimates, Wanted and a bit of Kick-Ass will keep me reading the last two issues. Written by anyone else and this comic would be average and left on the shelf, I think I just hoped for more out of this series with all the initial build up.

Some Batman fans may find it slightly offensive that this is sold as a creator owned piece when all he did was turn Batman upside down. Some of issue two even lifts scenarios from the Christopher Nolan’s Dark Knight. In issue 2 Nemesis has a car (Nemesis-mobile) which turns into a bike when he gets into trouble with the cops.

When Superior gets released I hope it doesn’t turn out to be a Superman rip off as it would mean not only has Millar lost his awesome originality but he is also predictable and a little lazy.